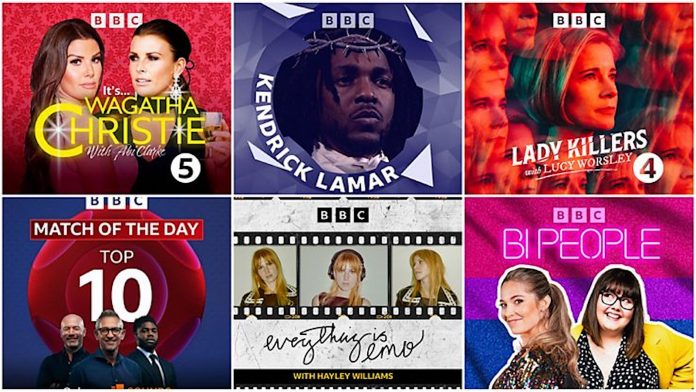 It’s… Wagatha Christie was among the hugely popular new podcasts that helped bring a record 4.3 million weekly users to BBC Sounds between April and June this year, with a peak of 4.45 million during the week Coleen Rooney and Rebekah Vardy’s trial went to court.

New titles Lady Killers with Lucy Worsley, It’s… Wagatha Christie and The People Vs J. Edgar Hoover were among the most popular podcasts on BBC Sounds this quarter.

Returning series’ proved popular among younger listeners with Match Of The Day: Top 10 the most popular podcast for under 35 year olds, and Bad People and You’re Dead To Me once again in the top ten.

Moreover, 6 Degrees with Jamie and Spencer had the highest proportion of listeners under 35 with Pressed, Match Of The Day: Top 10 and The Footballer’s Football Podcast among the top ten.

New series of The Unbelievable Truth, The News Quiz and Just A Minute were among the most popular on demand radio programmes after The Archers, with Radio 1’s Dance Anthems topping the list for listeners under 35.

New music show launched for Back To Back Sounds Everything Is Emo with Hayley Williams was among the most popular music mixes this quarter.

The latest data shows there were 392 million plays of all audio on BBC Sounds, with a total of 177 million plays for on-demand radio and podcasts in this quarter.

The new series of David Mitchell’s enduringly popular The Unbelievable Truth was the most listened to on-demand radio programme after The Archers for all adults on BBC Sounds this quarter, followed by In Our Time and The News Quiz.

They also featured in the top ten most listened to radio programmes for under 35s, which was topped by Radio 1’s Dance Anthems.

The Breakfast Show with Greg James had the highest proportion of listeners under 35, followed by Radio 1 Anthems and Kenny Allstar.

New podcasts that launched this quarter were among the most listened to on BBC Sounds.

Lady Killers with Lucy Worsley which uncovers the true stories of Victorian women accused of murder, was the most popular.

It’s… Wagatha Christie, launched around the Coleen Rooney and Rebekah Vardy libel case that dominated the headlines, proved popular among all adults and listeners under 35 this quarter.

Increasingly popular returning series’ helped drive younger listeners on BBC Sounds this quarter, with Match Of The Day: Top 10 the most popular for listeners under 35.

Bad People, the podcast that questions the psychology behind some of the most disturbing cases in modern history, returned with a series of special episodes for pride month, Bi-People, and was once again among the top ten most listened to podcast for under 35 year olds, along with the beloved history podcast You’re Dead To Me.

The acclaimed new series The People Vs. J. Edgar Hoover also featured in the top ten most listened to podcasts, along with Newscast, Putin and Ukrainecast following another busy news period.

With Hollywood royalty now lining up to be their guests, 6 Degrees with Jamie and Spencer was among the most listened to podcasts by under 35 year olds, as well as the highest proportion of listeners under 35 this quarter.

The straight-talking podcast Pressed was also among the podcasts with the highest proportion of listeners under 35, and with the season reaching its climax, Match of the Day Top 10 was the most popular podcast among younger listeners.

New music show Everything Is Emo with Paramore’s Hayley Williams launched for Back To Back Sounds, the new music feature on BBC Sounds, was among the most popular music mixes, contributing to a total of 3 million plays of music this quarter.

The consistently popular Sounds of the 90s with Fearne Cotton was the most listened to music mix, followed by Radio 1 Happy and the long awaited return of Glastonbury, after the festival’s three year hiatus.