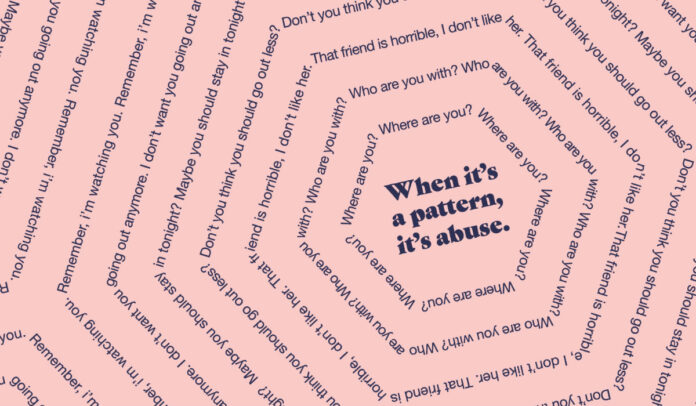 The Women’s Aid Federation of England – the national domestic abuse charity – has launched an arresting press ad in Vanity Fair raising awareness of coercive control, which is at the heart of domestic abuse.

Coercive control creates invisible chains and a sense of fear that pervades all elements of a victim’s life.

The work, by ENGINE, conceals a hidden message of abuse within a beautiful pattern, created from a series of questions that form a pattern of abusive behaviour.

The behaviour escalates slowly to a grim and frightening conclusion; highlighting how coercive control is designed to control, manipulate or frighten another.

Data from the Crime Survey for England and Wales (ONS, 2019) suggest that women are overwhelmingly the victims of coercive controlling behaviour.

97% of defendants prosecuted for coercive and controlling behaviour in the year ending December 2018 were male.

However coercive control is still yet to be fully recognised and understood; and awareness is needed to ensure that the justice system and wider society recognises that abuse is a pattern of behaviour that restricts a woman’s freedom over time – not just single incidents or physical assaults.

This ad aims to explain coercive control in a clear and memorable way; and to encourage donations in support of the brilliant work that Women’s Aid do in helping domestic abuse survivors.

Chris Ringsell, Creative Director at ENGINE, said: “In this difficult time awareness of the work Women’s Aid do is even more crucial; especially as some people will now be forced into isolation with their abusers.

“What a terrifying thought.

“This creative execution highlights the menacing form of abuse that is Coercive Control, a pattern of repeated, controlling and abusive behaviour.

“We created a bold, clean and simple graphic ad to stand out amongst the image heavy luxury / fashion editorial style of Vanity Fair.

“Arresting at first glance the copy has an underlying menace that highlights this awful form of abuse. This type of coverage in a magazine like Vanity Fair will help Women’s Aid highlight the cause, raise awareness and hopefully encourage much needed donations.”

Faye Connelly, Fundraising Manager at Women’s Aid, said: “From our work with survivors, we know that coercive control is at the heart of domestic abuse yet continues to be largely misunderstood and underreported.

“It has been a pleasure to work with ENGINE on an advert which recognises abuse as a pattern of controlling behaviour that takes place over time. This can have a devastating and long-lasting impact on survivors.

“During these uncertain times and under current guidance, we know that a lot of women will have to spend more time indoors.

“We are thinking of all those for whom home is not a safe place but one of fear and control.

“For women experiencing domestic abuse, the workplace is often an escape and they will need our services more than ever.

“You can help us support those reaching out by donating to our urgent appeal today.”

‘The Pattern of Abuse’ will run in the March issue of Vanity Fair; in a donation of media supplied by Conde Nast, and is on sale from the 20th March.