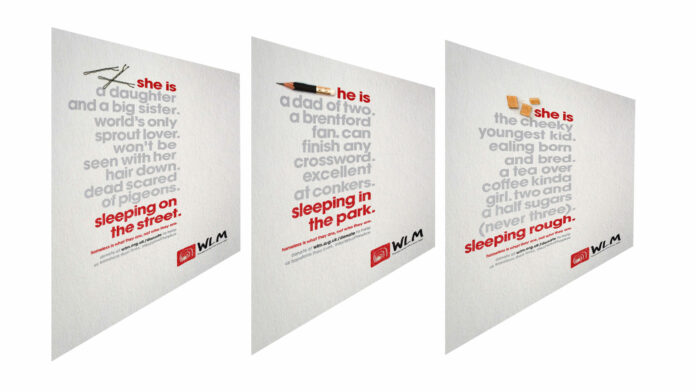 The charity said it hopes to change attitudes to homelessness, which is on the rise.

In London, we’ve seen an 18% year-on-year rise in homelessness from 2018 to 2019, WLM said, adding that the topic is rarely out of the news and is increasingly visible on our streets.

The charity said that everyone seems to think it’s someone else’s problem: “We’ve all done it – walked past that homeless person on the street. Whether out of lack of time, fear or just being unsure what to do – we all assume/hope that the next person will”, it said.

The charity insists that homelessness is a problem we can’t afford to ignore, which is why it wanted to make the problem feel more real for people and make them think twice about walking past homeless individuals without taking action.

So, as part of its ongoing partnership with AMV BBDO, it’s created its first-ever advertising campaign – to bring to life the human side of homelessness.

“It’s too often the case that ‘the homeless’ are all bucketed into the same group, who all suffer from the same problems”, the charity said. “They are wrongly defined by their situation.

“But we all know that everyone has their own distinct skill sets, passions, dislikes, and – ultimately – personalities…So why should homeless people be viewed otherwise?

WLM’s campaign seeks to help people relate more to the people they might see on the streets – each of them with different backgrounds, different problems, different strengths and different stories.

In making the problem feel more real, WLM hopes that people will consider helping its mission of getting homeless individuals off the street and, more importantly, into permanent accommodation and employment.

This, the charity said, is: “Because homeless is what they are, not who they are”.

The campaign is currently live on WLM’s social channels (Facebook,Twitter and Instagram), and will be live in OOH (Out Of Home) across Marylebone Underground station in the first two weeks of December.

It is also organising a Carol Service in the station on 10th December, to help encourage donations via selected donation boxes.

“We respect the individuality of our service users and offer a range of services across the capital which help them off the street and into more fulfilling lives”, WLM said.

This includes the following vital services:

You can donate to the charity via the WLM website