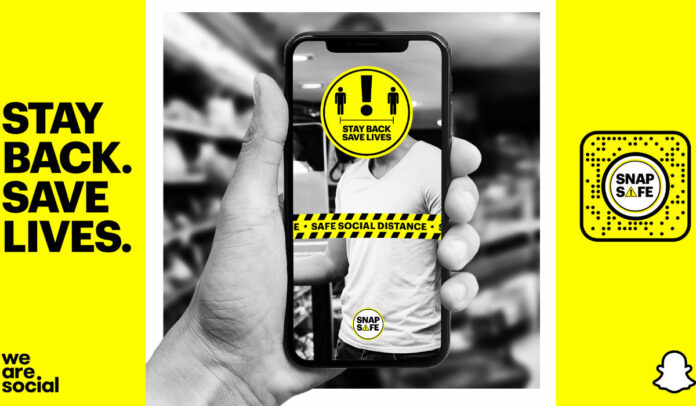 Global creative agency, We Are Social has launched a new Snapchat Augmented Reality Lens to help people keep a safe two-metre physical distance in public during the coronavirus outbreak.

The agency’s new Lens is called Snap Safe. It was created following a United Nations ‘Call to Creatives’ to help communicate six key messages to the world’s population.

One of those was the importance of physical distancing in helping to prevent the spread of COVID-19.

But rather than just telling people how to act, WAS said it really wanted to bring the issue of physical distancing to life and enable people to put it into practice in real-time.

The Snap Safe Lens uses proximity augmented reality technology to show exactly how far away people need to stand from other members of the public when out and about during lockdown.

As the filter opens in Snapchat, it counts up to 200cm to help cement the safe distance in the user’s mind.

The design of the Lens, and supporting branding, is based on the bold, black-on-yellow motif of physical safety barriers and warning signs.

If people get too close to the user, the Snap Safe AR Lens displays a warning which states: ‘STAY BACK. SAVE LIVES’.

The agency noted that Snap itself has released another version of the Lens this week.

Snapchat users can test the Snap Safe Lens for themselves now by scanning the Snapcode below:

The agency said it was pleased to see AR being deployed in a way can have a real impact on the lives of people all over the world.