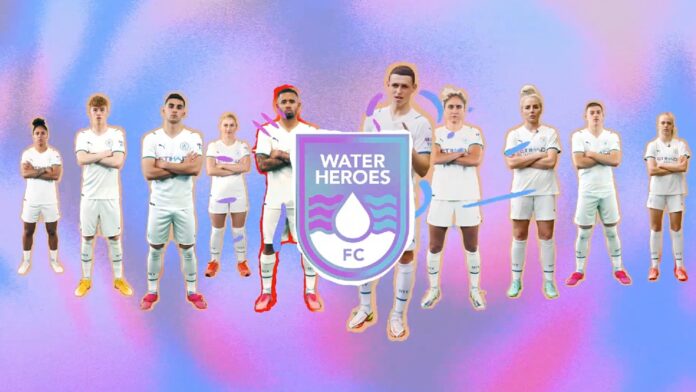 Fronted by Manchester City manager, Pep Guardiola, ‘Water Heroes FC’ is a brand new team that has come together to turn the tide on the global water crisis.

Shot throughout the global pandemic and created in partnership with director Ben Jones and artist/animator Ruff Mercy, this is the first-time players from the Manchester City Men’s, Women’s and Academy teams have come together to front a campaign.

The Water Heroes FC campaign sees Pep Guardiola and his squad call upon us all to do our bit and tackle the world’s water crisis in our own “extra time”.

Launched with a highly energetic and colourful film, the campaign highlights and educates us on how we can use our extra time to help solve the water crisis.

From taking small actions such as spreading the word on water issues on social media platforms, to getting involved in bigger actions such as helping to plant more trees, fighting flooding, or engaging in river clean-ups.

Since 2018, the partnership has produced award-winning content with over 35 million views, and built a network of over 500 young water ambassadors that have delivered life-saving water education to over 20,000 individuals.

The campaign will break across social and VOD and will be supported by a series of content films, as well as activity across digital and display from mid-October.

The films, and digital content will drive to waterheroesfc.com- a dedicated website where people can find all the information they need on how to help solve water in their “extra” time.

Joseph Vesey, Xylem’s Chief Marketing Officer, said: Our work with Manchester City has already reached over a billion people to raise awareness about pressing water challenges around the world.

“Now, working with a legendary leader like Pep, we aim to unite the public, students, community leaders and NGOs, to take action to solve the water challenges in their communities.”

Pep Guardiola, Manchester City FC said: “Where I’m from, in Catalonia, drought is always a risk. The issue of community access to affordable water is very important to me personally.

“Our Foundation’s first activities, this summer, were working with children in Barcelona to help educate them on the importance of preserving water, and I’m so pleased to be partnering with a water leader like Xylem to help address water issues in communities everywhere.”

Paul Pearson, Creative Director at Brave commented: “The world is facing a water crisis, but lots of small actions can lead to big change. And that is exactly the aim of this campaign.”

Declan Garvin, Business Director at Brave said: “It’s exciting to build on the momentum of our previous Xylem-Manchester City partnership work with this new campaign.

“We’re sure that bringing all the Manchester City teams together with Pep leading the charge will inspire even more football and non-football fans around the world to actively join us to take action on water issues and build a more sustainable future.”

The campaign was created by Brave in association with Ben Jones at Dark Energy Films and Ruff Mercy at My Accomplice and is part of Xylem’s continued investment and commitment to help solve the world’s greatest water challenges. SPORTFIVE, manages Xylem’s global partnership with Manchester City.