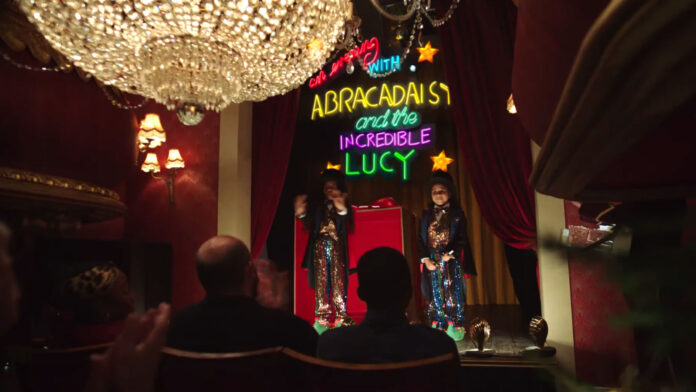 High street and digital retailer brand Argos has launched its Christmas advert, sticking with the ‘Book of Dreams’ theme, despite having discontinued its iconic catalogue earlier this year.

The Argos Christmas gift guide launched its campaign on Saturday night to millions of viewers across the UK during the Family Fortunes game show on ITV.

The film, shot by award-winning director, James Rouse, taps into the nostalgia that so many people can identify with, eagerly looking through the Argos Christmas gift guide and dreaming of opening your most wished for gifts on Christmas day.

A familiar story for many, Argos brings this dream to life when two sisters spot a simple box of magic tricks; a magical box that is set to take their Christmas to enchanting new heights.

As the girls circle their perfect present, they’re magically transported to Christmas evening, where they, like many children before them, are keen to show off their new present and their marvellous new talents to their family.

Their show starts with a classic, the old cup and balls trick, but the performance quickly becomes more and more extraordinary as the sisters grow in confidence and their imagination takes over.

Not content with making presents magically appear or an illusion trick on the family’s sausage dog, these modern day Houdini’s transform their living room into a West End theatre and even manage to conjure up their extended family to join in on the fun.

The spot is set to Gary Barlow’s ‘Incredible’, which was released on Friday and is the second track on his highly anticipated new album ‘Music Played by Humans’.

The single’s artwork leans heavily on the campaign look, and Gary Barlow has been teasing the ad release on his social channels.

Rob Quartermain, Senior Campaign Manager for Argos, said “We know this has been a challenging year and many people are searching for certainty through cherished traditions this Christmas.

“Whilst we discontinued our catalogue earlier in the year, we couldn’t let the Argos Christmas gift guide go as so many of our customers have fond memories of circling their presents in it.

“We know this is a tradition which children still enjoy today, and it marks the start of Christmas for so many.

“We wanted to celebrate the special role Argos plays at Christmas with a joyful and heart-warming story that we hope will spread some cheer, this Christmas”.

Yan Elliott, ECD, The&Partnership said “This year, we felt more than ever we are all going to need a little bit of magic to lift our spirits and transform this Christmas into something spectacular.”

The TV spot follows a social tease by Gary Barlow over the weekend, and is part of a 360 campaign which will also see Argos inviting the nation to create their own magic tricks for top prizes later this month.

The campaign will also include dynamic OOH where Argos magic up the top gifts people are dreaming of, press to help with gift inspiration throughout the festive season, and influencer engagement to help bring some magic into the home.