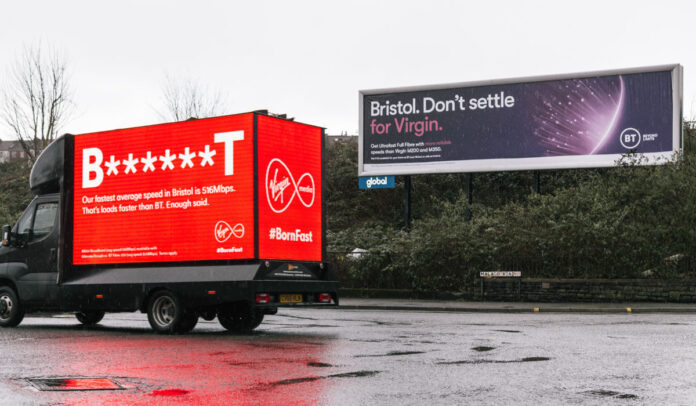 Virgin Media has today called out what it called BT’s ‘dubious, unsubstantiated advertising’ with a cheeky and provocative stunt.

The company aims to highlight the strength of Virgin Media’s network and speed superiority over the UK’s telecoms incumbent.

BT’s billboards, which are currently deployed in Bristol, claim that residents in the area shouldn’t “settle for Virgin”. Instead it says they should opt for services provided by the century-old company, which started life as a telegraph operator. Ouch!

Virgin Media said its billboard helps to “separate B*** ***T from reality given its ultrafast network passes more premises with faster speeds in the city and surrounding areas”.

Virgin Media said its network covers almost 300,000 premises in Bristol with top packages having average speeds of 516Mbps. This, it said, is significantly faster than BT’s Ultrafast Fibre 250.

The broadband provider added that, through private investment, Virgin also expanding its footprint and rolling out next-generation gigabit speeds (1Gbps) across its entire network of 15 million premises. This will, it said, deliver more than half of the government’s broadband target by the end of 2021.

Currently BT’s gigabit ambition is limited to four million premises with the possibility of going further under the right conditions.
BornFast

To kick off the #BornFast stunt, created by RAPP UK, mobile billboards will be placed in front of the BT posters in locations across Bristol.

This is to ensure residents get the message in a fun and humorous way, Virgin said. It insisted it was all in the spirit of clarity and competition.

The stunt is also being supported by content on Virgin Media’s social media channels with the potential to bring the billboards to other areas in future.

Al Mackie, Chief Creative Officer, RAPP UK said: “Virgin Media, as all the great Virgin brands, is about disrupting the market and making it better for consumers.

“While it has the fastest widely-available broadband in the UK it hasn’t lost that challenger belief. So it will stand up to the dubious tactics of the other broadband providers.”

“Residents of Bristol won’t be fooled by BT’s babble. We look forward to welcoming anyone who wants to experience life in the fast lane with our superior ultrafast speeds.

“With a reliable future-proof network that is bringing gigabit speeds to Bristol and more of the UK, Virgin Media is, as always, leading the charge – catch us if you can.”