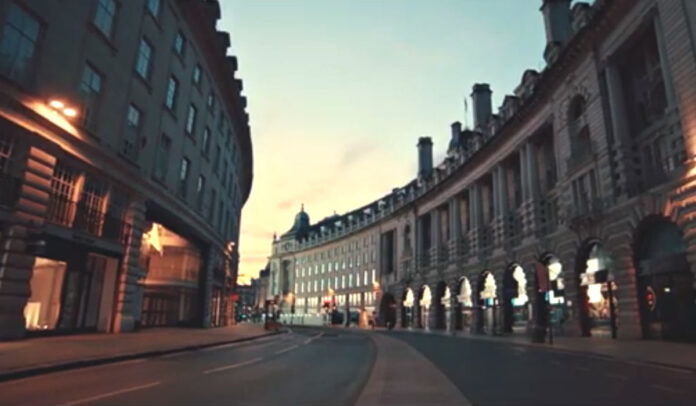 The film is a moving cinematic capture of the moment we’re all sharing on account of the global coronavirus pandemic.

Wiltshire worked with industry colleagues and called on friends Hannah Reid from London Grammar and Harley Alexander-Sule from Rizzle Kicks for contributions.

“What do you do when you’re an ad agency creative who suddenly finds themselves with more free time than they ever thought possible?” Wiltshire said.

“You film a beautiful tribute to the NHS, of course!”

Wiltshire, teamed up with industry friends, director/creative duo, Luke Nutt and Mike Rodgers to capture on film what the city feels like during lockdown; and how our eerily silent streets belie the life and death experiences taking place in our hospitals.

The film begins with beautiful images of familiar London sights, strangely still, accompanied by London Grammar’s ‘Hell to the Liars’. A poetic script by Mike and Luke is narrated by Rizzle Kick’s Harley Alexander-Sule (a friend of Henry and Luke).

The film then cuts to NHS doctor Dr Anna Kunnenkeril telling how life will never be the same again.

How she and her colleagues find themselves overwhelmed emotionally and physically by the relentless demands they face.

The mood then lightens to one of celebration as we see the incredible support for the NHS, via moments from the UK’s Thursday evening communal outpouring of thanks.

The beautiful final sequence shows Harley’s son painting a rainbow for the NHS.

Making a film in a city under lock down is unlike anything the team had ever done before.

For the team, Londoners born and bred, the sight of the Capital’s silent streets left an indelible impression; and the film’s opening dream-like scenes convey just how surreal these times are.

The tribute came about through collaboration. All production was virtual (no director or producer were physically on location).

Wiltshire used his experience and contacts to facilitate this new remote way of working.

They reached out to director and producer colleagues with a brief to shoot scenes from their homes and local areas whilst on their daily walks – all footage captured on phones.

The teams’ families were brought in to participate in front of camera and other footage was contributed by the public.

Dr Anna Kunnenkeril, a schoolfriend of Mike’s, and a doctor in a London hospital has been vocal in fighting for the patients and key workers throughout the pandemic.

Hannah Reid from London Grammar (Luke/Henry know Hannah through their friend, Sean O’Conner, Hannah’s fiancé) heard about the project and agreed to the use of one of the bands’ hauntingly perfect songs, ‘Hell to the Liars’.

The team spoke in detail about the tone, rhythm and intonation of the words to accompany the amazing images they were getting in.

Mike came up with a heartfelt script to convey the mood of the city captured in the film’s unsettling opening moments.

Harley Alexander-Sule of Rizzle Kicks brought these words to life with a truly beautiful read.