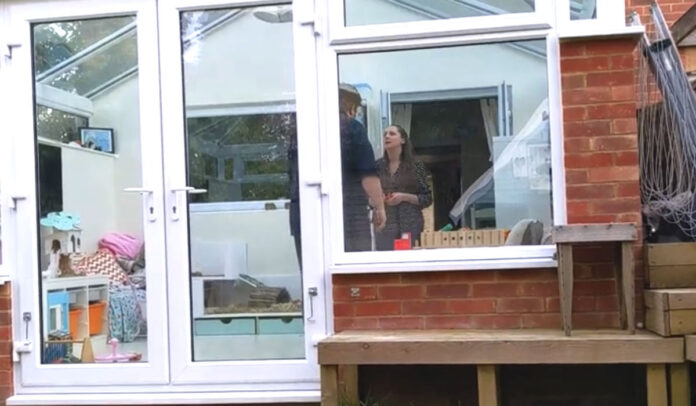 The video ad from the  ‘Abusers Always Work From Home’ campaign features actors working from home under virtual direction.

It highlights the increased danger that victims are facing and underscores Crimestoppers research which showed that reports of domestic abuse have soared by 50% since the start of the lockdown.

The hard-hitting video gives a fresh, relevant take to the user-generated content aesthetic we’re seeing more of; placing the viewer wholly into this terrifying potential scenario.

The actors did the filming themselves due to the coronavirus lockdown. They were directed remotely by Geej Ower and an all-female creative team.

It opens with a familiar scene of domestic activity during the quarantine, with the couple video-calling friends and family, doing the laundry, clapping for the NHS and playing with their kids.

But soon the viewer gets the sense that all is not right. There are intercuts of a simmering argument, a slammed door, the sound of smashed glass; until at last we face the shocking scene of the mother and child desperately hiding from the enraged father.

The voiceover is from BAFTA winner Vicky McClure, who played a woman trapped in a controlling, manipulative relationship in Channel 4’s I Am... Nicola, (2019).

The digital video will be shared on social platforms as well as Stylist who have offered to support the campaign.

There is also an OOH poster campaign and media owners such as JC Decaux, Clear Channel and Blow Up have already offered hundreds of free poster sites around the UK.

“Wunderman Thompson has created an exceptional piece of creative that really drives home just how bad the lockdown can be for people trapped at home with abusers”, said Mark Groves, CEO of the National Centre for Domestic Violence.

“The support we’ve received has been amazing; and we’re hoping to drive the message home and get more victims the help they need.

“Our mission is to make domestic abuse and violence socially unacceptable both during lockdown and in more normal times.”

Jo Wallace, Creative Director at Wunderman Thompson UK, added: “This campaign involved no budget and just a great deal of passion with the support and help from an incredible group of people.

“The whole project, including the casting, filming and sound, was carried out virtually in accordance with social distancing.”