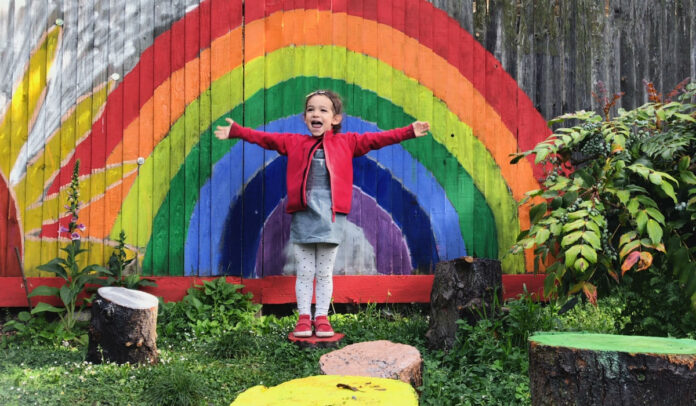 The aim is to highlight the need for everyone everywhere to have clean water, especially during the current Covid-19 pandemic.

Johnty Gray, Mass Engagement Director, WaterAid said: “The rainbow has become a powerful symbol of hope and unity during the Covid-19 outbreak; highlighting how we are all facing this crisis together and therefore a global effort is required to tackle it.

“Yet we are not all equally equipped to fight the pandemic. Globally, one in four health centres have no clean water, putting health workers and their patients at increased risk of infection.

“Through our campaign, we are sharing the message that getting clean water to everyone everywhere is key to fighting the spread of disease – you need water to get a rainbow.”

The rainbow is now a sign of solidarity and belief that began in our schools, and that now adorns our streets; filling the windows of our homes and the temporarily closed windows of restaurants and businesses across the planet.

In the campaign film ‘You Can’t Have a Rainbow Without Water’ real rainbows are documented across the globe; from London, to Berlin, to New York, Amsterdam, Milan, Rome, Prague, LA and Adelaide.

A challenge even in normal times, Stink Films was able to use its global reach and ask directors and photographers across the world to go out (safely) and capture the rainbows that filled their streets.

Running parallel to this, Don’t Panic worked with WaterAid’s ‘voices from the field’ teams in Ethiopia.

A local artist visited each of the centres where the charity had just installed clean running water, and painted rainbows of hope on their walls.

Local filmmakers were then commissioned to capture the scenes.

“What we felt we all wanted, was to see beyond the same four walls that have become our morning, day and night. To see the world again”, said Rick Dodds, Creative Partner, Don’t Panic.

“So by partnering with Stink, we were able to shoot in several cities around the world on the same day.

“The good news is, the world is covered with hope. It’s in our living room windows, hanging from our balconies and plastered on our walls.

“We wanted to “bottle” that hope in our spot, and spread it further to those who needed it most.”

The piece was shot in less than a week by a collection of Stink Films directors; on an array of recording devices including DV, phones, Reds and 5D’s. It was then patiently pieced together by Stitch editor, Paul O’Reilly.

Katie Lambert, EP, Stink Films said: “This film was challenging as we had to capture a lot of rainbows, across multiple locations, in only four days.

“It was intense and wouldn’t have been possible without the help of all of Stink’s offices around the world.

This is the first piece of creative from Don’t Panic for WaterAid after winning the business in January.

The work is part of a three to five year campaign the agency is devising, alongside media agency The Kite Factory, to elevate the experience of supporting WaterAid.