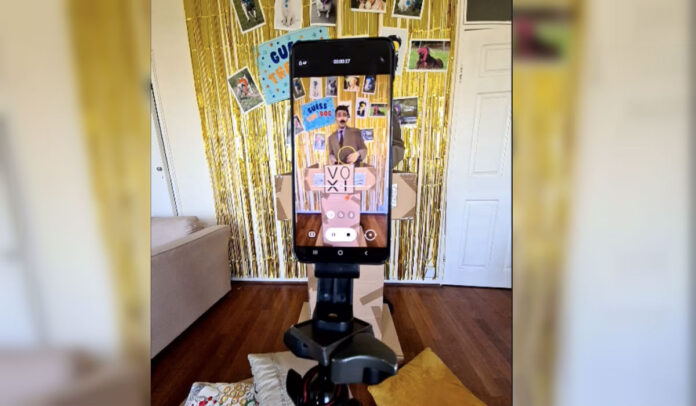 You may have caught it because the advert aired during last Saturday’s episode of Britain’s Got Talent.

Part of the ‘I Am Endless (even in isolation)’ campaign, the ad plays on endless abilities with endless data; featuring multiple scenes of social media trends currently taking place in people’s homes.

Voxi campaign by Ogilvy and The Mill

Developed by creative agency Ogilvy in collaboration with production partner The Mill, the spot was directed by The Mill’s Jocelyn Anquetil who worked with the entire production team including casting, set design, agency creatives, 2nd AD and on-screen talent to direct the spot over the video conferencing app Zoom.

Uniquely, the ad doesn’t utilise any stock footage; and was shot using the 4K front and rear cameras on the Samsung S20-series phones; as well as using their internal microphones. This allowed for high quality footage but with manageable file sizes.

The Mill assembled a bespoke system whereby the lead actor could stream the live camera feed over a mobile data network; which allowed Director Jocelyn to frame the shots and direct them entirely remotely.

Having the core creative team on a live conference call allowed the team to set up, shoot & review takes as if they were together on location.

The set-up also utilised Samsung’s ‘Samsung DeX’ system which allowed the editor to transfer and download all the footage with ease.

“Voxi’s latest campaign brings to life just how much our customers rely on our products and services to stay in touch with loved ones or do the things they enjoy most”, Max Taylor, Consumer Director, Vodafone UK said.

“Technology really does have the power to unify us and I hope our story of a totally isolated team delivering a first class ad from their home offices and kitchen tables inspires everyone”.

Jon Tapper, Head of Advertising, Ogilvy London said “We are incredibly proud of this new work for Voxi; for its creativity, cultural relevance and innovative approach.

“It is a testament of our strong client partnership with Vodafone, our fabulous production partners and the unwavering determination of everyone involved to deliver brilliant work in these challenging times.”

The Mill’s Director Jocelyn Anquetil said: “Whilst there were certain creative challenges we faced on this project, using platforms such as WhatsApp and Microsoft Teams and Zoom to communicate came very naturally to me and the team.

“I worked closely with our lead actor, using real social media references to achieve the performance I was after, as well as watching and feeding back on the takes in real-time’.

The integrated campaign launched 9 April across digital and social platforms; TV slots and VOD kicked off on ITV during the Britain’s Got Talent advert break on Saturday 11 April.