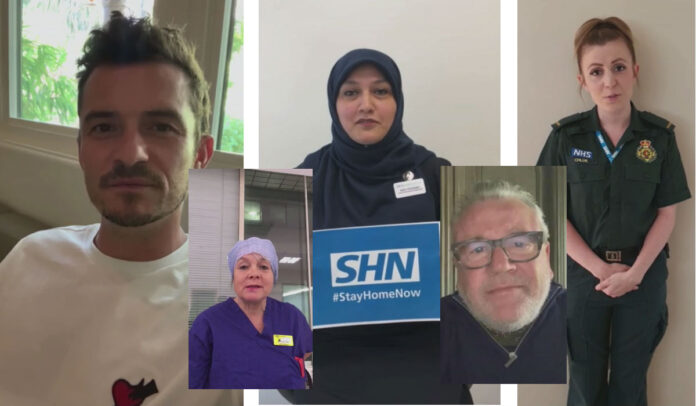 Creative agency St. Luke’s has launched a new film to reinforce the STAYHOMENOW message as the government extends the lockdown across the UK.

The hashtag #STAYHOMENOW has already become well used across social media in the UK and beyond.

The film to be shared on social media features UK frontline keyworkers, actors and singers speaking the words of the 1939 song “We’ll Meet Again” made famous by Dame Vera Lynn, which she recently re- recorded with Welsh mezzo-soprano, Katherine Jenkins.

The SHN film, which runs for 2 minutes and 20 seconds, was created by St. Luke’s and directed by British film director and photographer Malcolm Venville, through Anonymous Content and Final Cut.

It features 44 people: keyworkers and supporters, filming themselves, and remotely edited by Rick Russell, with the endline “Together we can turn this around”.

The soundtrack is a gentle acoustic guitar played by musician Michael Palmer seen on screen; the arrangement was by Sacha Puttnam a composer who has trained under Vangelis and Quincy Jones; and has scored the music for over 30 films.

A poignant tribute to the UK’s frontline key workers and the National Health Service (NHS), the film positively reinforces the World Health Organisation (WHO) and UK Government message to save lives, by staying home and practising social distancing to slow the spread of COVID-19.

Importantly, to give health workers and the UK National Health Service (NHS) a chance to treat those who most need their help.

There is national respect for health workers and particularly frontline workers in the NHS. This is demonstrated every Thursday night as the nation stop to #clapforcarers at 8pm; to thousands of individuals and businesses supporting communities locally and nationwide.

Rich Denney, ECD at St. Luke’s: “Seeing the NHS staff, keyworkers and the nation get behind our #StayHomeNow message has been incredibly touching.

“Creating this film to further strengthen the message as lockdown is extended in the UK felt like the right thing to do; using our communications resources and skills to help keep the message front of mind.”

“Staying at home and social distancing, is the biggest piece of behaviour change ever demanded of the British public”, said Neil Henderson, CEO at St. Luke’s.

“We launched the SHN logo in mid-March, to reinforce the Government’s message to Stay Home Now; with a graphic that simply reversed the iconic NHS logo.

“People have grabbed this idea with its straightforward message, built on it and shared it.

“The SHN film aims to continue that message and capture the way everyone is working together to support and protect our NHS.”