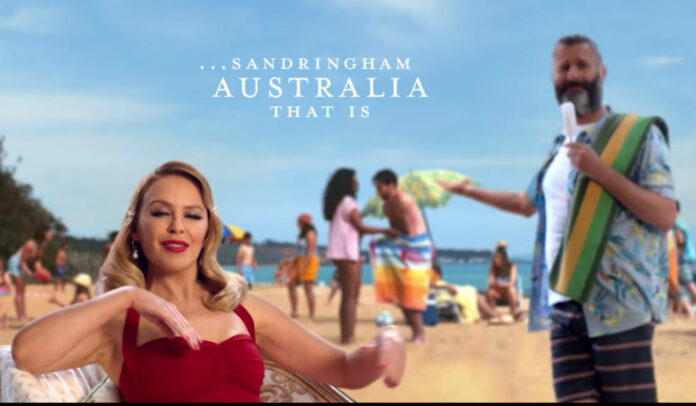 What’s not to like? Tourism Australia has launched its latest campaign to lure Brits to the land down under, and it’s a cracker.

It all starts off in regal fashion – what else do you expect from the Queen of Pop? – as Kylie sings about the past year being a bit ‘tough and confusing’.

As the music starts, the caption ‘Kylie from Sandringham’ appears, before Comedian Hills pushes a wall down to reveal a sun-drenched Aussie beach – in Sandringham, Australia.

Brexit, Royal scandals and British weather are all hinted at by the cast, which includes Ash Barty, Adams Hills and Shane Warne.

The lyrics are packed with comic and lovingly intended, leg-pulling quips like “Sisters and brothers, We know you think you’re above us, But deep down you love us…”

Kylie even reprises her much loved and long since past Neighbours character, Charlene Robinson, wrench in hand.

The ad campaign had its first outing just ahead of The Queen’s Speech on ITV on Christmas Day – so almost guaranteed to hit a large audience. It’s also garnered nearly 200,000 views on social media channel YouTube.

But we think you should just watch the gorgeous film yourself and let us know what you think. So here it is…