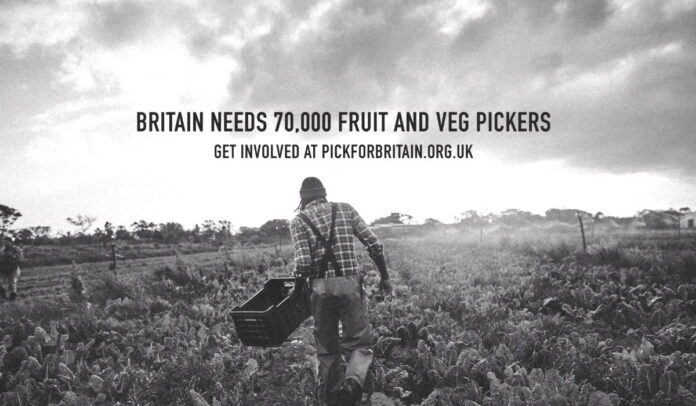 ITV has launched a new advertising campaign with Waitrose in support of the farmers’ Pick for Britain initiative.

The campaign ad was launched on Tuesday 19 May.

The partnership, which includes a primetime TV advert first to air on Tuesday evening, will urge the British public to get involved and drive potential applicants to the pickforbritain.org.uk website, where the public will be able to search for local vacancies in nearby areas that will be advertised.

The campaign aims to recruit 70,000 new pickers. It comes amid fears that coronavirus restrictions would prevent much of the usual workforce returning to farmers over the summer; leaving the nation’s fresh supply of fruit and vegetables being unpicked.

The ITV and Waitrose collaboration will support Pick for Britain through a joint airtime initiative, produced by adam&eveDDB.

Waitrose will support the TV campaign by placing ads across national print and digital outlets; with targeted content also being created for key social media platforms.

The aim is to raise awareness amongst students, graduates and younger people looking for long term contracts over the summer.

In addition, later in the year, ITV will broadcast a special film following the journey of several people who have volunteered to be a part of this ground-breaking new land army.

The programme, chronicling one of the biggest mobilisations of labour in recent times, will be produced by Wonderhood Studios.

Pick for Britain was launched by the Department for Environment, Food and Rural Affairs; supported by organisations such as the National Farmers Union, amidst fears of a labour shortage on farms over the harvest period; jeopardising the livelihoods of many British farmers and producers.

Simon Daglish, Deputy Managing Director, ITV Commercial said: “The Waitrose partnership is one of numerous ways in which brands are coming together to drive public awareness of the challenges everyone is facing throughout this pandemic.

“This ad campaign will shine a light on the invaluable work carried out by farmers throughout Britain; and we’re hopeful it will help to bridge the labour shortfall.”

Rupert Thomas, Director of Trading at Waitrose, said: “We source so much homegrown produce during the UK season, that we absolutely need to ensure it’s picked.

“But it’s also vital for UK farmers and growers that the country’s fruit and vegetables aren’t left to rot.

“While the ad will leave viewers with no illusion that the job of a picker is easy – we hope it will capture the imagination and encourage people to do something extraordinary that’s for the good of the nation.”

NFU VP Tom Bradshaw said: “This year there will be thousands of vacancies opening up on farms across the country; to help farmers get iconic British produce from field to plate.

“From British strawberries being picked in early June, all the way through to apples being harvested in the Autumn, the importance of workers to pick, pack and grade fruit and veg cannot be understated.

“We have been working closely with the government who have launched the Pick for Britain website. I would encourage anyone who is interested in helping pick for Britain throughout this summer to visit the site”.