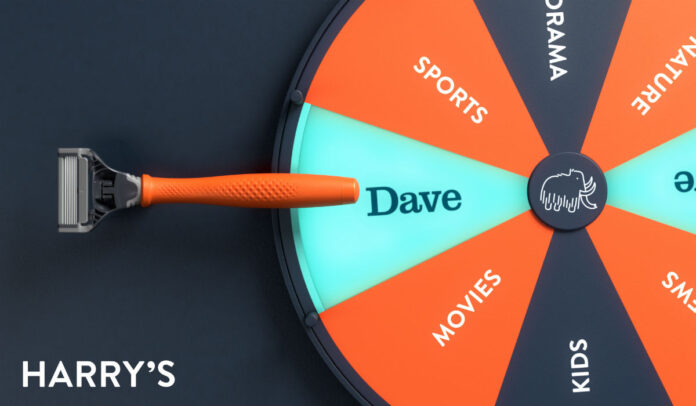 Harry’s, the men’s skin care and shaving brand, has activated its first TV sponsorship of comedy channel Dave with a new series of idents.

The TV spots were created by Brothers and Sisters and planned and bought by Goodstuff.

The sponsorship is running from now through to 2 August. Harry’s idents will appear in a series of four break bumpers across Weekends on Dave.

The ten-second spots take a ‘meta’ approach to the sponsorship, the agency said. One ad even jokes that the deal was signed because ‘Dave rhymes with shave’. Another claimed that the partnership was chosen by spinning a wheel of fortune.

Each film features the brand’s iconic orange razor, almost as a character in its own right.

Harry’s long-standing media agency, Goodstuff negotiated the deal as part of a strategy to tap into its audience’s interests and bring them a little light humour.

This will be the first time that the skin care firm has run a television sponsorship.

Both Brothers and Sisters and Goodstuff have worked with Harry’s since 2017, when it launched as a start-up DTC brand in the UK.

The brand is an alternative to the mainstream, hyper masculine shaving establishment with an irreverent tone of voice.

Harry’s has since become a leading omni-channel player within the global men’s care space.

“It’s a milestone for Harry’s that after three years in the UK, we’re undertaking our first TV sponsorship”, Ben Dancer, Sr. Brand Manager at Harry’s, said.

“It’s exciting that our Weekends on Dave partnership gives us a chance to reveal these fun and upbeat idents at a time where entertainment is playing an important role for the nation.

“At Harry’s, we take shaving seriously but ourselves much less so; and to carry this through to the creative itself was a brilliant, quite meta idea that we couldn’t resist.”

Andy Fowler, Executive Creative Director at Brothers and Sisters, said: “Harry’s messaging really resonates with an audience of shavers who don’t buy into the pomposity of the mainstream brands; so it was obvious that we needed to carry the humble, humorous tone of voice through to these idents.

“As ever, the team at Harry’s are open to playful, sometimes left-of-field ideas. This makes them a dream to work with.”

Gaby Kerezova at Goodstuff said: “As Harry’s media agency, we’re thrilled to have found and negotiated the sponsorship with Dave.

“Apart from them being a fantastic brand fit, both brands have a unique way of speaking to the audience; which really stands out in the market. It’s a relationship that was meant to be!”