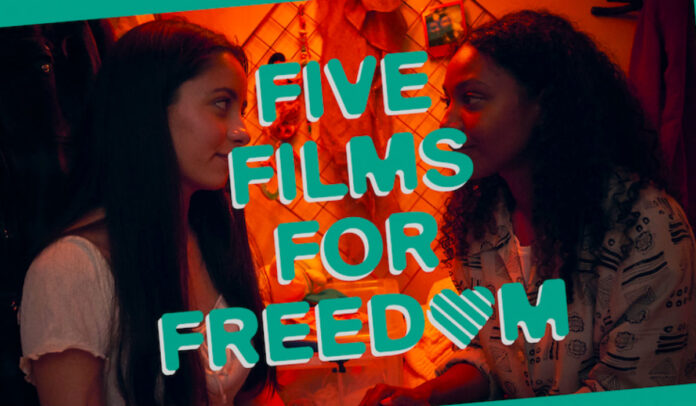 Five Films For Freedom, the world’s largest LGBTIQ+ digital campaign, will mark its sixth year by broadcasting five brand new LGBTIQ+ films to countries around the world, including those where homosexuality remains illegal.

In 2020, filmmakers from Norway, Ireland, Brazil, and the UK explore compelling LGBTIQ+ realities; from navigating family relationships to the struggle for and celebration of sexual freedom. Watch the campaign trailer via the link in the attached release.

Global audiences are encouraged to show solidarity with LGBTIQ+ communities around the world by watching the films on the British Council’s YouTube Arts channel.

This year’s Five Films For Freedom programme comprises an inspiring mix of drama and documentary from multi-award-winning directors and screenwriters.

• After That Party: Brazilian director Caio Scot tells the moving story of a man on a mission to find the perfect way to tell his father he knows the truth about his sexuality.

• Something In The Closet: British writer and director Nosa Eke’s short film sees a queer teenager struggle with her sexuality as her desires begin to manifest themselves in unsettling ways.

• When Pride Came To Town: Award-winning directors Julia Dahr and Julie Lunde Lillesæter provide a provocative yet heart-warming account of Norway’s rural Pride network through the eyes of 52-year-old Bjørn-Tore, shedding light on the ongoing battle for gay rights in one of Europe’s most liberal countries.

Over 14 million people from more than 200 countries have viewed the Five Films For Freedom programme since its launch in 2015.

This includes online engagement in countries where homosexuality remains illegal, and in some cases punishable by death.

Acknowledging Five Films For Freedom as a unique global opportunity for LGBTIQ+ support and connection, former participant and Scottish film director Siri Rødnes said: “Five Films For Freedom made my short film ‘Take Your Partners’ available all over the world to audiences it would never otherwise have reached.

“I am immensely proud to have been involved in this truly innovative programme and to have had the opportunity to promote and publicly discuss my film’s universal themes on such an international scale.”

These films will also screen as part of this year’s BFI Flare: London LGBTIQ+ Film Festival.

“At the British Council, we are proud that filmmakers trust us to present their work to the eyes of the world; and we’re always overwhelmed by the positive response.

“Imagining audiences across the globe enjoying the films and witnessing their reactions to them is really eye-opening. It feels like the whole world is taking a moment to celebrate LGBTIQ+ lives with us.”

Michael Blyth, Senior Programmer, BFI Flare, said: “Since its inception in 2015, Five Films For Freedom has given us the opportunity to share queer stories with millions of audiences across the world.

“As LGBTIQ+ people in many countries continue the ongoing fight for basic human rights, this campaign offers an essential moment for global communities to come together in solidarity and ensure that our collective voices remain heard.”

All films will be available to view from 18 – 29 March 2020 via the British Council Arts YouTube channel.