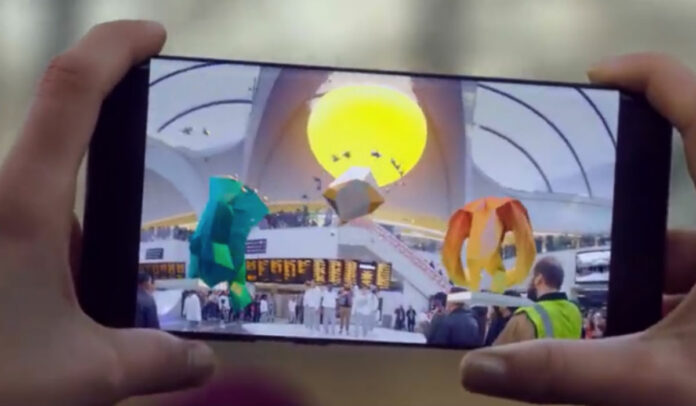 The campaign stars multi-platinum selling British band, Bastille with a remixed version of their iconic hit “Pompeii”. And Kevin Bacon is also back in a spectacular showcase of the power of EE’s 5G network.

The campaign was developed by EE’s advertising agency, Saatchi & Saatchi London. It had its first outing on Monday 13 January during Love Island on ITV2.

In this instance, enabling commuters across the UK to immerse themselves in a 360-degree augmented performance by Bastille.

Commuters could watch the mixed-reality action unfold in real time despite being hundreds of miles away from the performance taking place in Birmingham New Street station.

The ad opens on the Birmingham skyline at dusk ahead of ‘a live AR performance’. It then zooms in on Kevin Bacon seemingly left to his own devices. He’s seen roaming through London’s busy King’s Cross, destined to create an unforgettable commute using EE’s 5G network.

Meanwhile, the stage is being set for the 5G magic to play out at some of the UK’s most bustling city centre locations including Liverpool and Edinburgh.

Nreal’s glasses allowed fans to watch the one-of-a-kind show on a huge digital screen. This combined the physical and digital worlds in a previously unseen way, creating a refreshing departure from the daily commute.

Dan Smith, singer songwriter from Multi-platinum selling British band, Bastille, said: “Knowing our performance in Birmingham was being enhanced by augmented reality and streamed over EE’s 5G network to fans all over the UK made for a really fun and unique experience.

“It’s exciting, as a band, to try and push the boundaries of live performance and to experiment with interesting new technologies to create something different”.

Pete Jeavons, Marketing Communications Director at BT and EE commented: “Since we launched the UK’s first 5G network last year, we’ve rolled it out to 50 cities and large towns across the UK, more places than any other network.

“This amazing activation with Bastille showcases some of the extraordinary possibilities of 5G with augmented reality rendered in real time and streamed to multiple cities simultaneously; and highlights the benefits that 5G brings to customers by providing fantastic connections even in the busiest places like train stations.”

The campaign will run across TV, out of home (OOH), cinema and video on demand (VOD).

EE switched on the UK’s first 5G network in May 2019, launching in London, Edinburgh, Belfast, Cardiff, Birmingham and Manchester. It has since expanded its 5G rollout on a daily basis.

It also switched on its first 5G sites in Liverpool, Glasgow and Huddersfield. This means EE brought the best mobile experience to a total of 50 cities and large towns in 2019.