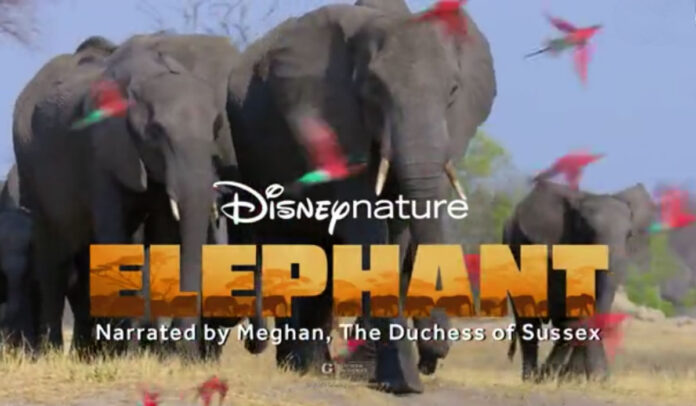 Disney has confirmed that Meghan, Duchess of Sussex, has narrated a new film in her first return to acting since quitting the Royal Family.

In a Twitter post the global production company said: “Disneynature’s Elephant, an Original Movie narrated by Meghan, The Duchess of Sussex, starts streaming April 3, only on Disney+.”

Disneynature’s Elephant, an Original Movie narrated by Meghan, The Duchess of Sussex, starts streaming April 3, only on #DisneyPlus. pic.twitter.com/ArpgkbrjRj

The date of the release is significant. It comes just three days after Harry and Meghan are due to officially end their tenure as senior royals.

A trailer for the nature film revealed that it “follows one family’s extraordinary 1,000 mile journey across Africa on an adventure that will change their lives”.

There’s an in-joke there somewhere. Harry and Meghan have travelled thousands of miles themselves to change their own lives.

Many will now understand why Harry was touting his wife’s voiceover skills last year.

The Duke of Sussex, 35, was caught on camera mentioning his wife’s voiceover skills to Disney boss Bob Iger at the UK premier of Lion King last July.

Harry told them: “Next time, if anyone needs any extra voiceover work, we can make ourselves available.”

In any other walk of life, this would be seen as positive steps to earn a living. We don’t understand what the fuss was all about.

The Disney film follows three African elephants, Shani, son Jomo and Gaia, as they trek across the Kalahari Desert.

Shani, Jomo and Gaia face a number of life-threatening challenges. This includes a lack of sustenance and vicious predators as they tread an epic ancestral route to a fertile plain.

Elephant is one of two films the famous film company is due to release. the second film is called Dolphin Reef and is narrated by Natalie Portman.