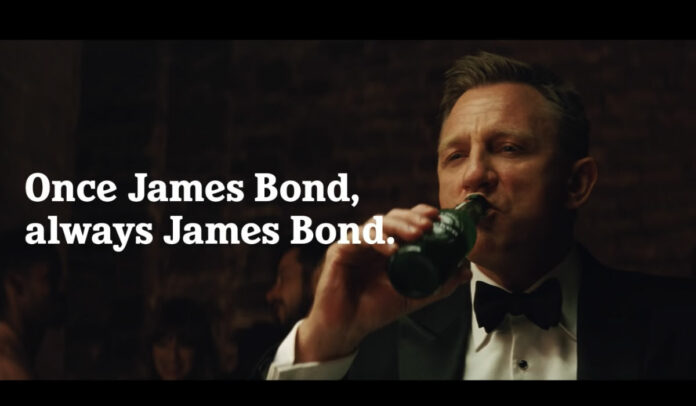 The two minute spoof shows Craig being constantly mistaken for his 007 character with hilarious results.

Heineken’s campaign comes as interest grows around the April release of the 25th Bond outing, No Time To Die.

We’ll let you enjoy it here:

No Time To Drink! – Busy Bond opts for zero alcohol

As if that wasn’t enough, Heineken also created a second, shorter version of the ad to promote its zero-alcohol beer Heineken 0.0%.

It shows Craig foregoing Bond’s favourite Vodka Martini in favour of a non-alcoholic Heineken instead.

One thing that’s made us curious is the tagline at the end of the main ad.

We all know it’s supposed to be Craig’s last outing as the famous British spy. But the tagline “Once James Bond, always James Bond”, has us wondering if this is some kind of cryptic clue.

Now, we’re huge fans of the Bond franchise, and what Daniel Craig has done with his Bond, so this is probably just very wishful thinking.

But we also love the franchise’s ability to poke fun at itself. More of this please.

Future adds Marie Claire US to roster of women’s mags

VIDEO: It wouldn’t be Christmas without Aldi’s ‘Kevin’