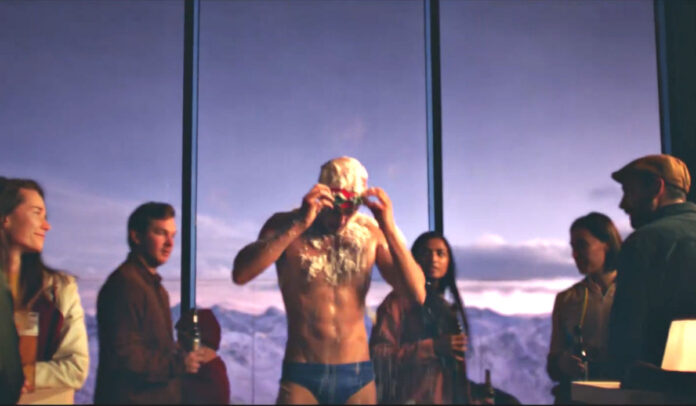 Coors Light, the iconic, Molson Coors-owned beer, this weekend launches a major new brand campaign and positioning in the UK: Keep It Fresh.

By the way, we think this may be the first new beer campaign to run after Brexit. At any rate, it’s fun, cheeky and original.

Taking inspiration from the brand’s Rocky Mountain heritage and its longstanding strapline ‘The World’s Most Refreshing Beer’, it champions freshness as an attitude and celebrates fresh perspectives.

Against a stunning, snow-covered vista, one man limbers up as he prepares to ascend.

But rather than being kitted out in gloves, snow shoes or even a coat – as would be expected – he dons merely a swimming cap, goggles and a tight pair of trunks, as though about to go for a swim. And then he dives in.

Soundtracked by energetic garage track ‘Fresh’ by FooR, Majestic and Dread MC, his ascent up the mountain sees him front crawl past hikers, slalom round skiers, leap like a salmon over a crevice and, as he approaches the summit, indulge in a spot of backstroke to admire the view.

Finally, upon reaching a stunning vista bar at the mountain’s peak, he submerges under the snow once again. He emerges at the bar and towels himself down as the barman pours him a well-earned pint of Coors Light.

The ad even comes complete with deep, cinematic ‘voice of God’ payoff. We haven’t heard that in a while.

The ad, directed by Sam Pilling through Pulse Films, is backed by a substantial media spend. It will run on UK TV stations and video on demand platforms throughout the year. And it will include 30, 20 and 10 second cutdowns.

The campaign – which marks Havas London’s first work for Coors Light since winning the account in 2018 – also spans out of home executions, social, digital and PR activity and a series of idents, which will appear across Coors Light’s sponsorship of Comedy on 4 from 1 February.

“With the launch of this campaign, we’re shifting our focus from simply telling a story to, fundamentally, how we behave as a brand.

“‘Keep It Fresh’ is more than just a new advertising line; it’s an attitude. And having been born in the Rocky Mountains – the freshest place on earth – it’s one we’re uniquely placed to own.

“Building on our longstanding brand equity, we’ll be celebrating the world’s freshest attitudes and perspectives – and the people who live by them – and inspiring everyone else to get on-board as well.

“Ultimately, we want Coors Light to be the brand that champions and creates the most refreshing moments in culture.”

“And it doesn’t get much fresher than swimming your way up the mountain to the pub in your Speedos. Trust me, I was there.”