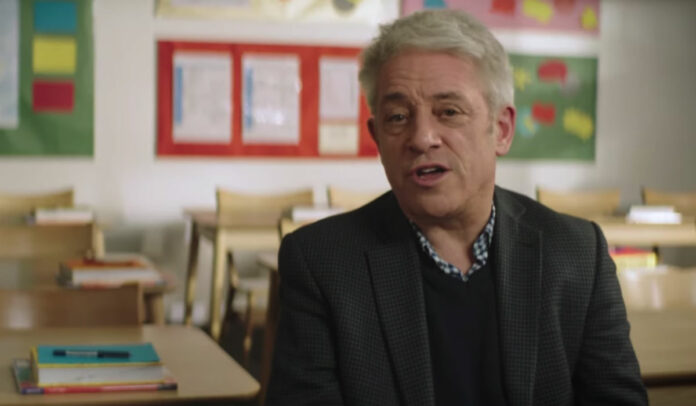 Former Speaker of the House of Commons John Bercow is to deliver this year’s Channel 4 Alternative Christmas Message, and the broadcaster has released a teaser of what viewers might expect in the full message.

In a tumultuous year in politics, Bercow will deliver a pro-democracy and pro-Parliament message of tolerance and respect from a classroom at his children’s state secondary school.

Having stepped down in October from the bi-partisan role of Speaker and after ten years of chairing some of the fiercest and most fractious debates in recent political history, Bercow continues to be a champion for the role of Parliament.

“It is not an earth-shattering revelation to say I believe in it. I passionately support Parliamentary democracy”, the former Speaker said.

“For all the criticism and abuse lobbed at MPs, I’m still a cheerleader for them.”

He candidly shares his view that “of late, democracy has come in for a pounding,” talking of how “it’s crucial for everyone to be free to say what they think and for politicians to respond” but stresses “democracy shouldn’t be about decibel levels.”

Light-heartedly referencing the frequent need to raise his voice in his former role, he goes on to say, “an opinion is no more valid because it is expressed more loudly, repeatedly or abusively.”

Bercow is a firm believer that we must better respectfully agree to disagree and feels strongly that “there are people… who cannot entertain the idea that anyone can honourably hold an opinion which differs from their own.”

As a Remainer, Bercow cites the example of his relationship with his best friend, a Brexiteer, who he says is “not an extremist, a racist or a fascist” and that, despite their differing views, the pair “respect each other as patriots, wanting the best for our country and the world.”

In The Alternative Christmas Message, which will be broadcast on Christmas Day at 2.25pm on Channel 4, Bercow also shares his concerns over the role social media has come to play in our lives, particularly the impact on young people, commenting that while it can be “amazing” it can often “amplify hatred, racism, misogyny and abuse.”

Inspired by his role as chair of the United Kingdom Youth Parliament (2009-2019), the former Speaker credits them with being “an example of respectful debate” adding “they spoke well, respected one another and behaved better than many political campaigners, two, three and four times their age.”

With 2020 rapidly approaching, Mr Bercow acknowledges “there will be many challenges around the corner, known and unknown” but stresses the importance to “find a way of ensuring the message isn’t drowned out by the noise.”

Signing off with a hopeful, positive reflection on young people who he says are “the future” and a wish to “re-establish a civility of discourse,” he hopes everyone has a “happy, argument-free and fun-filled Christmas.”

“It remains to be seen whether his hope that “political difference, personal courtesy… in the Commons, in our workplaces and in our homes” do indeed become “our guiding lights in 2020.”

The Alternative Christmas Message was commissioned by Tamsin Dodgson, Commissioning Editor for Entertainment at Channel 4.

It is a Rumpus Media production.