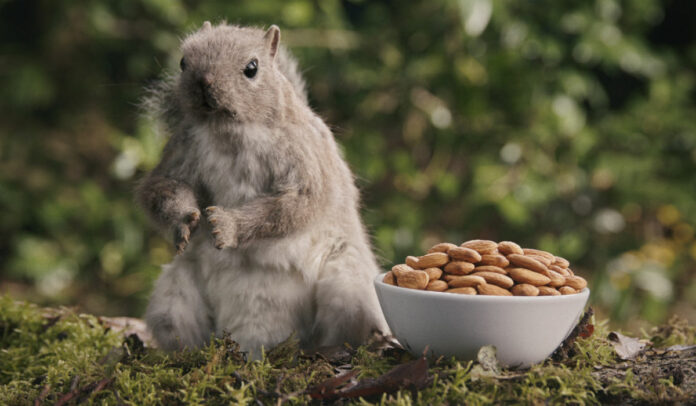 The Almond Board of California is investing £1.3m in a new multi-year campaign titled, Do You Almond?

ABC’s campaign hopes to fuel long-term demand for almonds in the UK market.

The group is a non-profit organisation representing California almond growers and handlers.

Consumers are increasingly seeking natural, simple and unprocessed foods, the organisation said. So it is capitalising on the opportunity to drive home the already well-established health benefits of almonds.

Almonds are already perceived by consumers to be the healthiest nut in the UK, the group said.

As one of the most researched foods, there is a body of scientific research into almonds’ health benefits documented in more than 170 published papers.

Each execution ends with the line: ‘Do You Almond?’.

From a contortionist granny to a life-drawing maverick, the campaign celebrates those who fuel with almonds to ultimately become the best version of themselves.

Do You Almond? launches today with a spend of £1.3 million in the first six months. It will run across multiple channels including digital OOH, digital TV, influencer marketing and paid social. It will also appear on Spotify and as podcast advertisements.

Following a six month launch phase, the campaign will continue to benefit from long-term investment in the UK market.

“There is a huge opportunity in the UK right now to highlight why almonds are so suited to evolving consumer preferences” said Dariela Roffe-Rackind, Director Europe & Global Public Relations at the Almond Board of California.

“The continued rise in popularity of plant-based eating has brought with it a return to a ‘back to basics’ desire from consumers for more natural, simple foods to fuel them throughout their increasingly busy lives.

“With almonds, whether they’re eaten by the handful or with other foods, consumers can feel good about eating them because they are a nutrient-dense, plant protein that also contain healthy fats and fibre to provide natural energy and goodness.”

“At the core of our new campaign is the idea that almonds are a natural fuel which allow consumers to be the best they can be.

“Ultimately, the campaign uses humour to position ‘almond’ as a verb and reinforce the positive connotations of “almonding” to drive awareness of the extensive benefits that eating almonds can bring.”

Ben Stump, Creative Director at isobel said: “The health food category can be a little dull.

“So, from the outset the team was keen to give almonds the standout they deserve. ‘Do You Almond?’ is a campaign that lets us play to our audience through a quirky tone and some tongue-in-cheek executions, while also carrying a truthful message about what almonds can do for you.”