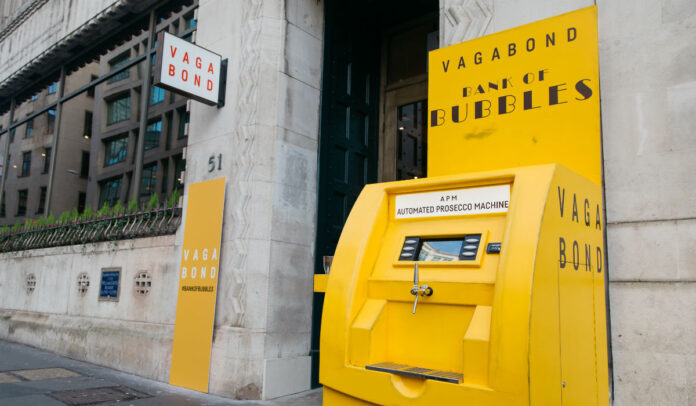 It’s all part of a campaign to mark the opening of the group’s newest bar in Gracechurch Street, EC3.

We’re big fans of this brand and it always come up with cool and fun launch campaigns.

The cool fizz is being offered free for the next two days only – today (Weds 29 January) and tomorrow.

The company cheekily said “Do you ever see your bank balance and think, I NEED a glass of prosecco right now! Vagabond’s Monument venue has you covered…”

The new Monument venue has taken over an old Santander Bank and to celebrate they transformed one of the old ATM’s into the ‘Vagabank’ offering complimentary prosecco to passers-by.

We honestly think this is the best thing that could happen to a Santander. We still haven’t forgiven the Spanish bank group for its role in the PPI miss-selling.

Vagabond said it hoped the campaign would put a smile on the faces of Londoners in the area.

“January can be a pretty miserable month, we’re all broke, partied out and can’t seem to stick to Dry Jan!” It said.

Monument will be the eighth venue to open its doors since the launch of Vagabond in Fulham 2010, boasting 160 wines and 10 self-pour craft beers, there is plenty to choose from.

The group said customers can pop into the #BankOfBubbles on Wednesday 29 and Thursday 30 January 2020.