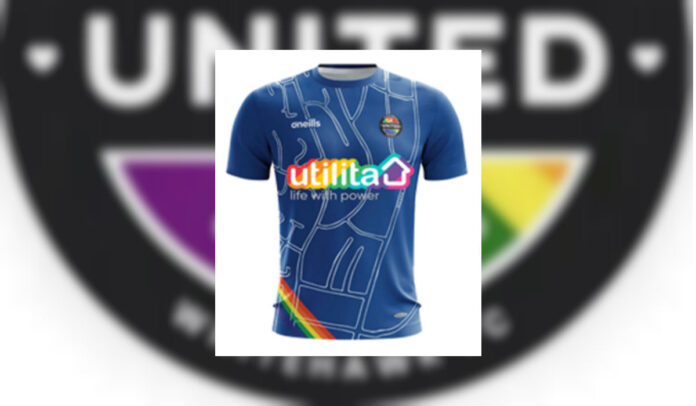 News of the sponsorship comes as Pride Month kicks off.

The UK smart pay-as-you-go energy supplier has agreed a two-year partnership deal with the club.

The deal sees Utilita’s logo displayed in rainbow colours on the Rainbow Rovers shirt; which has been designed by International Turner Prize artist, and curator of the 2018 Brighton Festival, David Shrigley OBE.

Utilita will also sponsor the next two Football United matches at Whitehawk FC and present ‘The Utilita Cup’.

“This partnership represents major support for our fully inclusive LGBTQ+ team moving forward towards Football United 2, and I would personally like to thank the team at Utilita for giving us such an endorsement”, Dr Sophie Cook, Manager of the Rainbow Rovers team said.

“Football holds a unique position within our society to carry the message of diversity and equality into areas that are often ignored and written off.

“The game is a universal language that transcends social barriers and Rainbow Rovers sends the message that the beautiful game belongs to everyone regardless of sexuality, gender identity, race, religion or gender.”

Jem Maidment, Utilita Chief Marketing Officer, said: “There’s no better time to announce our partnership with the Rainbow Rovers than in Pride Month 2020; as we push for greater inclusivity in football.

“We look forward to supporting the LGBTQ+ community in East Sussex and beyond.”

The team is comprised of LGBTQ+ players, supporters and activists from Brighton and around the country.

The deal represents a huge endorsement of Utilita’s commitment to inclusion in football.

It will give Rainbow Rover’s an opportunity to promote potential LGBTQ+ players, whilst complimenting Whitehawk Football Club’s inclusion stance.

VIDEO: We Are Social creates powerful LGBT+ film for IKEA