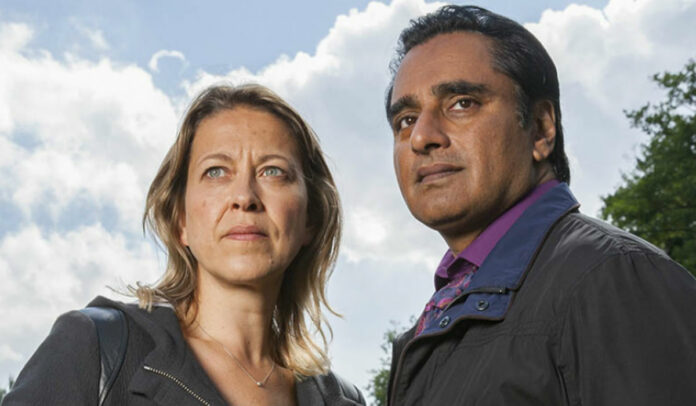 The fourth series opens with the discovery of a dismembered body in a scrap metal yard. The team believe it has been stored in a domestic freezer for thirty years.

A unique Millwall Football Club tattoo leads to the victim being identified as Matthew Walsh. He’s a young man in his mid-twenties who went missing in March 1990.

The team track the purchase of the freezer to Robert Fogerty. However, they’re disappointed to learn he’s recently died a lonely, broken man.

On looking further into his past, they discover a drink driving conviction on the same night their victim, went missing. Intriguingly there were four passengers in the car with him at the time.

As the investigation progresses, we’re introduced to Ram Sidhu and wife Anna who are expecting their first baby in London. We also meet Liz Baildon and her fiancée Janet who live in Cambridge.

Then there’s Fiona Grayson, her partner Geoff and their children in the Peak District. And Dean Barton and his wife Marnie who live in Rochester with their disabled son, Jack, and younger sibling, Casper.

All in their late forties, they appear to be in a good place. But the investigation has the potential to shatter their reputations, family relationships and the lives they’ve built over the last 30 years.

Meanwhile, after making the decision to retire from the police force for her own sanity and wellbeing, Cassie faces an impossible dilemma when she learns she isn’t entitled to her full pension payment unless she completes her thirty years of service.

Disappointed and angry with her superiors and the system, Cassie has to make the gut-wrenching decision to return to work. Whilst her relationship with John is going strong, she also faces difficult times with both her son, who has moved back home, and her father, Martin, who is struggling with early dementia.

Mainstreet Pictures’ Sally Haynes and Laura Mackie said: “We are proud to be making a fourth series of Unforgotten.

“Chris has created yet another memorable and emotional story that we are sure will delight the series’ loyal viewers.”

Writer Chris Lang added, “I am so excited to be bringing back the Unforgotten team for a fourth series, as Cassie and Sunny take on perhaps their most challenging case to date.

“Once again, we have assembled an astonishing cast, and I cannot wait to see how the very finest actors of their generation, start bringing my characters to life.”

“The series has received two BAFTA wins and a further nomination for its compelling performances. And the finale of the third series received average consolidated figures of 6.9m and a 28% share.

The series was commissioned by ITV’s Head Of Drama, Polly Hill. Mainstreet Pictures’ Sally Haynes and Laura Mackie are Executive Producers, along with creator Chris Lang and Rebecca Eaton for Masterpiece.

“Andy Wilson (World On Fire) returns to direct, whilst Guy de Glanville (Gold Digger) will produce the series. The series will be distributed internationally by BBC Studios and is a co-production with Masterpiece.