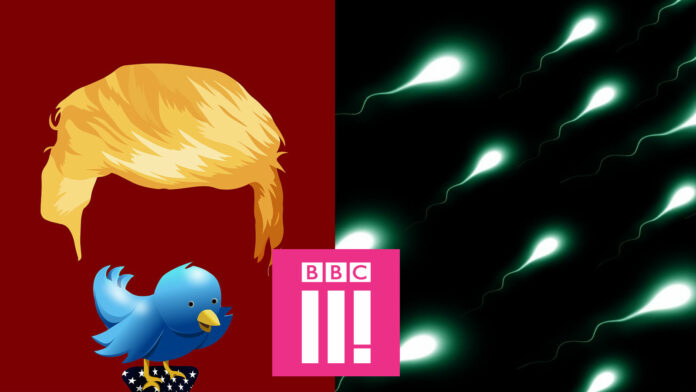 BBC Three has commissioned two new very different documentaries, one of which will look at US President Donald Trump’s Twitter habits.

The other will look at the impact of sperm donations on families.

The former has the slightly humorous working title Trump In Tweets. The latter, called 26 Siblings And Counting will examine the impact of donor-conception on families.

“These new films take us to the US and are stories about connection,” Fiona Campbell, controller, BBC Three, said.

One will look at President Trump’s extraordinary use of social media and the way he connects with his Twitter followers. Many entrepreneurs and businessmen might buy Twitter followers, but of course, Trump wouldn’t need any Twitter growth service to reach his audience.

The other is the story of a young Londoner who tries to find those connected to him via his DNA.

Using his tweets, it will tell how the US President came of age on Twitter. How he went from technophobe to serial tweeter, documenting the impact of his social media across the world.

The film uses first-hand testimony from people in his inner circle, interviews with experts and journalists, as well as hearing from his avid twitter followers.

It will tell the story of how Trump weaponised Twitter and used it as a political tool to shape his policies, conduct diplomacy and wage war on the establishment.

From his first innocuous tweet to the extraordinary exchanges with North Korea’s Leader and his continuing war on anyone who opposes him, the film will explore how his tweets provide an insight into his psyche, as well as maintaining his cult-like popularity amongst his followers.

It was commissioned by Campbell. The executive producers are Katharine Patrick and Emeka Onono and the commissioning editor, Specialist Factual is Jack Bootle.

The second documentary features 20-year-old Oliver from London, who was brought up as an only child to his two mothers, and has always known he was donor-conceived.

What he didn’t know was that more than 20 other children were conceived using the same donor’s sperm, until now.

This revealing documentary for BBC Three tells the story of Oliver and his extended network of 26-and-counting siblings in the USA.

The documentary follows Oliver as he tries to come to terms with his extraordinary new family tree by travelling to the States to spend time with his siblings, and his donor dad.

Through this very personal journey, the film will explore themes of identity, family, and belonging. But it will also probe some of the biggest ethical questions facing genetic science today.

26 Siblings And Counting, a 1×60′ for BBC Three, is made by Expectation Factual.

It was also commissioned by Campbell and the executive producer is Ruth Kelly. The commissioning editor, Specialist Factual is Jack Bootle.