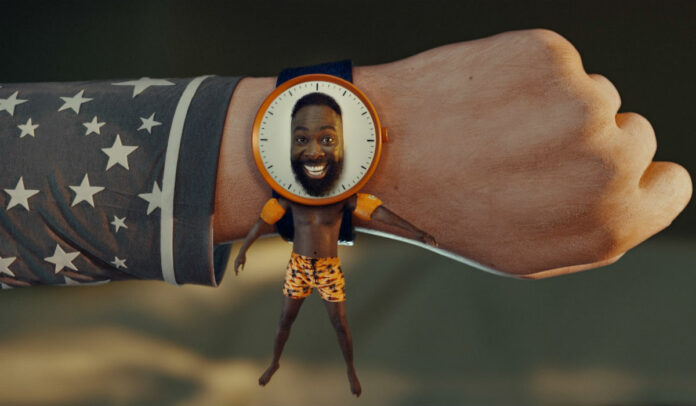 The ads use a tiny man in a watch hanging from a comedic fake arm to remind the nation that when they’re in a rut, it’s time for a holiday, and Travel Republic is there to help.

This is The Corner’s first creative for the brand, since winning an AAR-run pitch for the work in September.

The campaign light-heartedly recognises all those moments when a holiday is the answer – whether it’s to escape the news, relieve the stress or “reconnect” with your lover.

We all need a holiday

It’s inspired by Google research showing that the UK’s need for a holiday has never been greater. And it aims to make Travel Republic the brand that comes to mind in those holiday-trigger moments.

The face on the watch face is played by comedian Kojo Anim, who was a finalist on Britain’s Got Talent this year after receiving Simon Cowell’s Golden Buzzer.

A mere 28 million YouTube views later, Kojo is now ready to turn the boring watch face into a holiday-loving sidekick who pops up in the moments we need him most, to give us a little salsa dance, and show us that even in these testing times life is for living.

Take Me Out idents

This builds on Kojo’s first appearance for the brand in idents currently running around ITV’s hit-show Take Me Out, where the comedian in his new watch face helps people pick their holiday of choice.

30-second and 10-second TV executions are airing on Sky and ITV in the UK and on RTE, Virgin Media, Sky, Channel 4 and TG4 in Ireland.

The campaign also features a radio ad and is supported by social activity, as well as featuring prominently on Travel Republic’s website and in app.

The Corner partnered with production company Biscuit. Media is by Arena Media and Havas Ireland.

“When I heard I had the chance to play a 4-inch tall man in a watch, I jumped at it… just not very high”, Anim said.

“But seriously, I’m really chuffed to be the face of Travel Republic.”

Christian Poole, marketing director of Travel Republic, said: “This is a very exciting new approach for Travel Republic, focusing on the moments when a holiday is the only answer and the rewards holidaymakers get when they take time out to reconnect with friends and family.

“So, when we all find ourselves in those ‘I need a holiday’ moments, you’ll know ‘It’s Time to Travel Republic’.”

Neil Simpson, ceo and founding partner of The Corner, said: “Has there ever been a better time for some sun, sea and salsa? Our new campaign for Travel Republic recognises that the UK’s need for a holiday has never been greater.  So we’re making Travel Republic the default choice for all those moments when you need a holiday – and we’re doing it whilst putting a smile on people’s faces”.