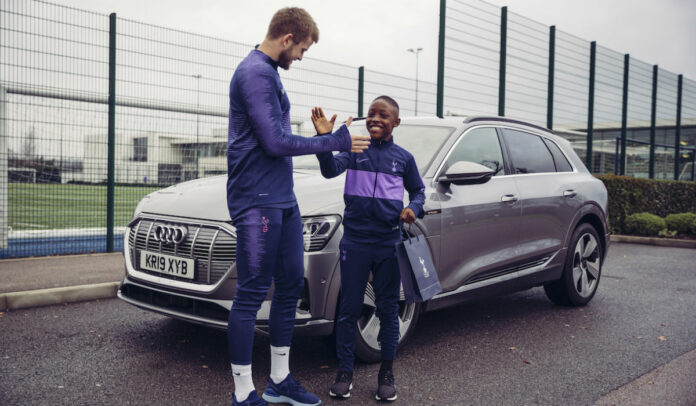 Six young Tottenham Hotspur FC academy players were given the opportunity to ask their Spurs idols anything they wanted.

It’s all part of Audi’s ‘Dare to be Different’ sponsorship campaign.

The campaign was created by We Are Social Sport to promote Audi’s multi-year sponsorship deal with the club.

Tottenham Hotspur stars Lucus Moura, Eric Dier, Jan Vertonghen, Kyle Walker-Peters and Josie Green join six young players aged 7-10 years old from the Spurs Academy in an Audi e-tron where, accompanied by their parents, the kids are invited to ask their heroes any burning questions they may have.

The children’s questions delved into areas some sports journalists might shy away from. This included their Champions League Final experiences and what they would get the manager for Christmas.

The interviews were filmed at the club’s training ground, Hotspur Way. They have been cut into eight-minute and three-minute films and five 15-second pre-rolls ads.

“We all know kids aren’t afraid to ask tough questions, and it was a pleasure to watch these young stars conduct such entertaining interviews with their heroes”, Christina Dudley, events manager, Audi UK, said.

“The Tottenham Hotspur players were great sports and didn’t shy away from some of the more difficult subject areas.

“While we love the e-tron, we have to admit that, in this case, it was overshadowed by these young superstars.”

Gareth Leeding, group creative director, We Are Social Sport, added: “Most honest conversations between a parent and a child tend to happen in the car, so we were hoping for a very open discussion.

“Footballers aren’t used to being questioned by kids. The innocence and the lack of filter leads them to go places where others wouldn’t, and do it with a smile.

Being subbed by Mourinho!

“When the first question to Eric Dier from one of the kids was: “How did it feel to get subbed after 29 minutes by Jose Mourinho” – we knew we’d stumbled across something good.

“Spurs and Audi took a risk by giving the kids a platform without censorship, showing they really are willing to dare to be different. The bar has truly been set for automotive and football sponsorship by Audi this year.”

The project builds on the success of Audi’s original partnership deal announcement in 2018. This saw the iconic Tottenham Hotspur cockerel brought to life.

The campaign was produced by Second Sight.