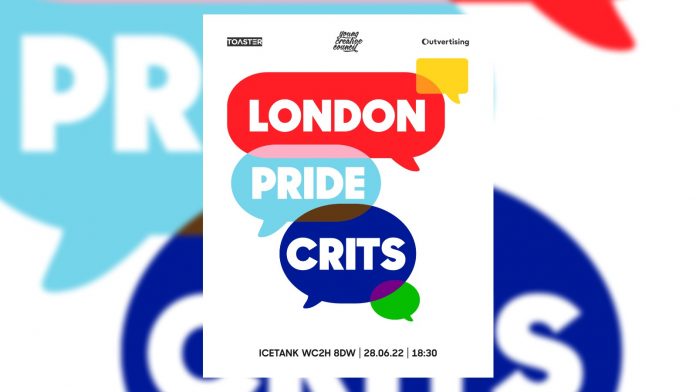 The First ever London Pride Crits will be hosted at Icetank, Grape Street on Tuesday 28 June 2022, the same week as the London Pride March returns to its regular early summer schedule.

The initiative aims to show the next LGBTQ+ generation of talent that this industry wants them – offering a welcoming, inclusive place to express their unfiltered ideas.

Advertising, marketing and creative industries are evolving to become more diverse and inclusive. But LGBTQ+ creatives still face discrimination and are often disadvantaged in working cultures.

Research has found that young LGBTQ+ people joining the workforce often feel the need to wear a ‘orientation mask’ to fit in:

London Pride Crits sessions aim to provide useful, actionable feedback and mentoring for LGBTQ+ creatives from any background, empowering them to bring their unfiltered ideas and personalities into our industry.

Dominic Healey, Creative Director EMEA, Toaster, who approached Outvertising and YCC with the idea, said: “As a young gay creative starting out, I was always worried about presenting my LGBTQ+ ideas to what was, more often than not, cis hetero men.

“And I was right, as a few times I was told similar things as ‘Gay doesn’t need to be the idea’. It left me feeling aware of who I was, and with the perception that my lifestyle/viewpoint wasn’t accepted in the industry.

“This mentality has carried on throughout my career in many forms, which is why this safe-space is so needed for this talented next generation to show them we need their perspective in advertising.

“And to help push our industry to change for the better.”

Ant Jackson, ED&I Lead at YCC, Outvertising representative, said “When I entered the industry as one of very few queer female creatives, I remember hearing many industry “legends” bang on about how nothing was original anymore, and every idea had been done.

“Then, every agency I’d walk into would be full of the same cookie cutter white, straight, male, middle class creatives, who bonded over the same sports and the same “banter”.

“These biases were more often than not also reflected in the work. The irony, hey? So I say, let’s give these men what they want!

“Diverse perspectives bring original thinking, new solutions to problems, a greater understanding for everyone, and impactful, progressive change (and when I say that, I don’t mean a gold Cannes lion winning ad that nobody in the real world has ever heard of).

“New diverse talent, if made to feel comfortable and empowered to do so, is also likely to challenge those in the industry who haven’t needed to make an effort and learn about ED&I until now.

“Because it never effected them — until now. Diversity isn’t a ‘nice to have’ it’s absolutely essential if we have any hope in removing our industry’s and society’s many biases and prejudices.

“So when Toaster approached us, creating this partnership with YCC and Outvertising was a no brainier.