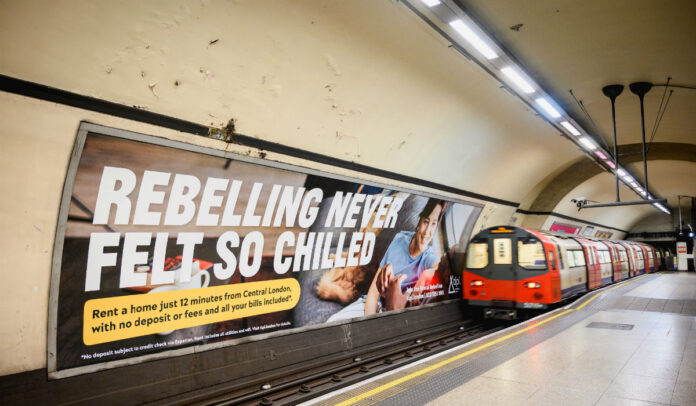 As a bold new entrant into the UK property rental market, offering homes at the largest single site of build-to-rent homes in the UK, Tipi needed a strategic OOH campaign.

The brief was to attract new residents and raise awareness of its apartments in Wembley Park; London’s most exciting new neighbourhood; and one of the largest development sites in Europe.

Tipi appointed M.i. Media, and partnered with Goodstuff and Talon, to plan and buy its multi-channel advertising activity; seeking to attract enquiries from London’s renters for its aspirational new homes.

With Tipi looking to achieve increasingly ambitious lease volumes, out-of-home was identified as the lead medium.

It was imperative that their posters reached and influenced a large number of prospective renters; and crucially the right calibre of people looking for high quality rental homes like those that Tipi offers.

The first wave of activity featured a largescale OOH presence spanning 8,000 London Underground sites; plus 200 bus sides in a broadcast approach to reach over half of London commuters across the capital.

The second, third and fourth phases, however, were developed to focus more specifically on target audiences pinpointed as prime prospects. These incorporated the use of Ada, Talon’s proprietary data management platform.

Ada activated billions of device-level audience data points to gain new insights into how affluent London renters move across the capital city; and how to reach and engage them effectively whilst on-the-go.

These models include Ada’s recently launched solutions for the London Underground network, which detects millions of commuter journeys every week and provides new insights about how to effectively target behavioural audiences across this vast public transport network which contains tens of thousands of advertising units.

All possible out-of-home locations were evaluated on how effectively they reach potential renters on their everyday commuter journeys.

The best performing locations were included in an optimised media buy. This achieved a 21.3% increase in on-target audience delivery compared to the natural delivery of London Underground ads.

Tipi’s OOH ads produced gains in brand awareness of more than 17%, helping the company to firmly establish itself as a market leader in such a fast growing sector.

However, it was the strategic use of Ada that delivered the most interesting results across some of the more difficult to shift brand metrics.

A 7% increase in emotional engagement with Tipi was reported. This was thanks to a significant increase in the sense of relevancy due to optimisation.

Ada planning also drove brand trust which saw a 13% increase along with brand consideration which saw an 11% rise.

The implementation of Ada has transcended OOH’s ability to push metrics across the whole brand funnel; establishing Tipi as a respected brand within the market.

“Using OOH as the lead media channel for Tipi made a significant contribution to our 2019 success, with consideration doubling and hitting a volume of monthly leases that has never been achieved in the Build to Rent industry before”, Dominic McVeigh, Head of Marketing, AcqusitionX at Tipi said.

“We are delighted with the impact and reach of the campaign and the behavioural insights we learned from Ada have been used to inform our broader multi-channel strategy above and beyond OOH.”

“In this instance, raising awareness of Tipi – disruptors within the rental market. But now, thanks to our work with Talon and their Ada platform, it can do so much more.

“Behavioural targeting allows for highly focused bursts of activity that drive brand consideration and business outcomes with the ability to identify and quantify exposure to each site, as well as audience post exposure behaviour.

“This is a real game-changer for the OOH market.”