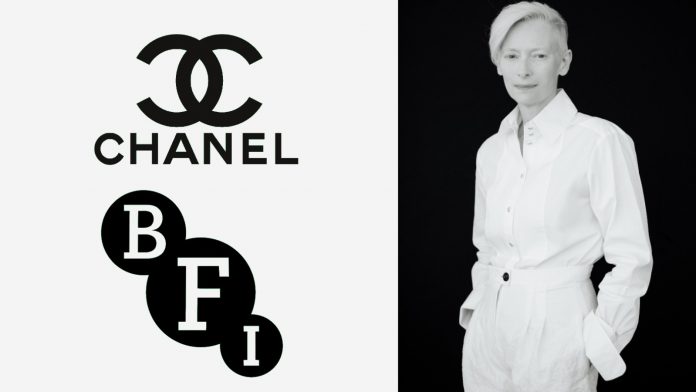 The BFI today announced an exciting new partnership with CHANEL with the launch of the new BFI and CHANEL Filmmaker Awards: Celebrating Creative Audacity, to be chaired by Hollywood actress Tilda Swinton.

Three awards of £20,000 each will be given to emerging UK film creatives who demonstrate originality and risk taking and want to explore a new dynamic to their work.

Swinton will announce the winners on stage at the BFI’s fundraising gala LUMINOUS on Thursday 29 September, a spectacular

celebration of film and generosity, raising funds for the BFI’s education work, amongst a host of British stars and industry luminaries.

“Both the BFI and the House of CHANEL are acknowledged beacons long-committed not only to the vibrancy of the new but also to the conscientious and dedicated custodianship of our precious cultural archive”, said Swinton.

“The partnership of the two is a powerful and meaningful alliance. It is my good fortune to work closely with these two families in my own daily practice: the spreading of this good fortune to more and more artists is a cause for real celebration.

The Filmmaker Awards will grow this fellowship significantly and the Luminous Gala raises crucial financial support for this indispensable public endeavour.

“It is my sincere honour to serve this awesome combo initiative in any way possible.”

The Awards will provide the three winning filmmakers with the financial and creative freedom to expand their craft, develop future projects, gain further skills, explore new ideas, and can also be used to support a residency or entry to a creative programme.

A panel of industry experts from across the sector will each nominate filmmakers, who will then be invited to apply for the Awards. Eligible producers, writers, directors, or writer/directors will be UK residents who have made one or two features or XR/immersive works which have been released in the UK (theatrically or via an approved streaming platform/on-demand service or at major gallery or

public UK event) or presented at a leading UK or international film festival.

A shortlist of up to seven creatives, with a focus on underrepresented voices, will be reviewed by the Awards jury.

At least one of the Awards will be given to a filmmaker identifying as female/non-binary and the projects that renders a filmmaker eligible will need to meet the BFI Diversity Standards.

Ben Roberts, Chief Executive of the BFI, said: “I am thrilled to be welcoming CHANEL as a new BFI partner – as a brand synonymous with quality, excellence, and creativity, it is an honour to have them on board.

“We have loved designing the BFI and CHANEL Filmmaker Awards with them – their passion for film, their unwavering commitment to an artist’s creative process, and their dedication to supporting new talent, has made this a natural partnership.

I’m grateful to Tilda, Edward and Marie-Louise for making time to be part of the Awards this year – they are an important platform for

UK film creatives, and I really can’t wait to see the inaugural shortlist.”

Yana Peel, Global Head of Arts & Culture at CHANEL, said: “CHANEL has had an ongoing dialogue with cinema since its founding, and the House continues to champion women and emerging filmmakers through many initiatives around the world.

“BFI and CHANEL Filmmaker Awards extend this cultural mission by spotlighting the new and the next in UK cinema – supporting bold ambitions in filmmaking and creating the conditions for artists to dare.”