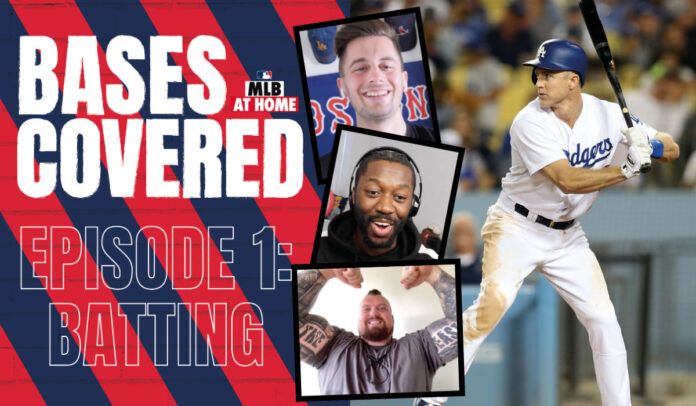 The 10-week series is designed to keep British and European fans entertained and excited about baseball.

Filmed and produced entirely during lockdown, ‘Bases Covered’ sees sports journalist and Boston Red Sox fan, Max Whittle and Hashtag United player and influencer, Jemel One Five challenged to recruit a roster of celebrity influencers to form their own baseball team, without leaving their homes.

Each weekly episode will focus on a specific element of baseball from themes; like batting and pitching to those that surround the sport like ballpark food and fan culture.

They’ll be calling in favours from the US; with regular appearances from current and former MLB superstars to share their advice; allowing viewers to discover all the aspects of baseball that make the game so compelling.

The series will culminate with the team getting together to meet for the first time and play a game.

Commenting on what people can expect from the series, Whittle said: “Ultimately it is two Brits, both representing the global expansion of baseball that we have seen in recent years, presenting from two very different angles.

“Myself, the established fan and broadcaster and Jemel, a YouTuber and new fan who will learn about the game along the way.

“Expect fun, engaging content that will often be straight out of left field!”

The first episode (above) has received over 100,000 views; and focuses on arguably the most exciting part of the game for newcomers and existing fans – batting.

It features six-time All-Star, Chase Utley (Phillies & Dodgers) as he helps Max and Jemel with their swing before they announce their first signing; former World’s Strongest Man Eddie Hall, who is picked as the team’s ‘Catcher’ and brings with him the strength to clear the back fence with just a flick of the wrists, and the presence to psych out any opposition player.

Episode 2 (below) focuses on ballpark food with the help of competitive ‘super eater’, Leah Shutkever, and the second teammate, DJ BBQ, who was chosen as shortstop (who is not short on personality) and knows his way around a home plate AND a hot plate.

‘Bases Covered’ forms part of MLB’s wider global initiative #MLBatHome. It aims to ensure that the public can still find ways to engage with the sport and connect with the baseball community; whilst teaching the public new skills and increasing their baseball knowledge.

Targeted at new fans, existing fans and playing community, the new series acts as the ultimate pre-season companion; giving people a reason to smile and making sure they are looking forward to baseball starting up again. It’s only understandable that baseball fanatics are all itching to watch and discuss the games as well as probably look up sports betting predictions for the latest stats and odds.

Alex Herron, Head of Content – MLB Europe, said: “Crafting a series designed to balance entertainment and learning for an audience that is new to MLB required a creative and resourceful approach.

“The Wild have developed a ‘baseball team building’ format that gives both our talent and audience a chance to absorb some of the ‘need to know’ elements of the game, while offering fun challenges and features that give the show an exciting dynamic. It’s a pleasure to work with such a dedicated team.”

Dylan Davenport, Managing Director of The Wild, commented: “In the US, baseball is a cultural juggernaut. In Europe, not so much.

“When MLB came to us to help reach this untapped audience, it was the dream brief. We had a simple plan – get MLB players, celebrities, influencers and other sports people on a new baseball show.

“We couldn’t wish for a better partner with MLB. They are seriously progressive and understand the best way to reach a new audience.”