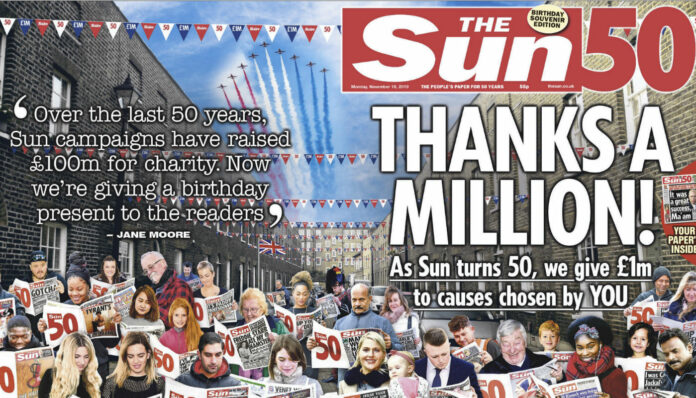 As part of its 50th birthday celebrations as a tabloid, The Sun newspaper has launched a major new campaign giving £1 million to reader’s favourite charities.

The tabloid daily is inviting readers to nominate the charities that mean the most to them, for the chance to share in a £1m year-long Reader Fund giveaway.

“Our strength has always been our ability to mobilise our army of millions of readers to get behind the campaigns that are important to them”, Tony Gallagher, Editor-in-Chief of The Sun, said.

“They have been enormously generous over the years, from knitting blankets to donating their hard-earned cash.

“By our best estimate, our readers have raised around £100m supporting our good causes.

“On our 50th Birthday, we are proud to be launching a £1m Reader Fund, inviting them to nominate the charities closest to their heart to receive donations across the coming year.

Nominations will be welcomed from readers across the UK, with particular focus on six charitable areas: Children and Young People, Health and Wellbeing, Veterans, Emergency Heroes, International Aid and Animals and The Environment.

Nominations will be long-listed by The Sun’s editorial team, before approaches are made to the charities to apply for funds for a specific project which could earn them a grant of anything between £2,000 and £20,000, and maybe even more…

“Since 1969, The Sun has been the people’s paper. Standing up for ordinary folk, and shining a spotlight on the extraordinary things they’re capable of achieving for themselves, their loved ones and their communities” Moore said.

“Across the last five decades The Sun has proudly championed the causes its readers care about – from finding forever families for vulnerable children to changing the law to ensure victims of domestic abuse are provided with safe accommodation.

“The Sun50 Reader Fund is undoubtedly going to create a whole new generation of inspirational stories as readers nominate the charities that have touched their lives.”

“For 50 years The Sun has been at the heart of the nation’s conversation”, Rebekah Brooks, News UK Chief Executive, said.

“As the people’s paper, it has never relented in campaigning against injustices, holding the powerful to account and giving a voice to the voiceless.

“Always with some fun and wit along the way. I’m excited that The Sun celebrates its 50th birthday as it began, celebrating ordinary people doing extraordinary things.”

The Sun claimed to be the UK’s best-selling daily newspaper, read by 2.6m people daily – while The Sun on Sunday is the biggest-selling Sunday newspaper, selling over one million copies.

Digitally, The Sun has topped the online newspaper charts for four consecutive months.

More than 33.5 million Brits turned to The Sun’s family of websites and apps for news, showbiz and sport in September.

Readers can nominate their favourite charities to be part of the Sun50 £1m Reader Fund by going to www.thesun.co.uk/50.

On behalf of Mediashotz, we’d like to say to The Sun, many happy returns on your 50th.