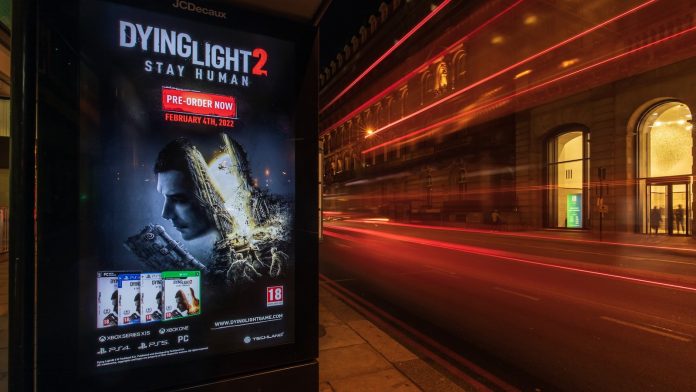 Techland, the developer and publisher of the Dying Light computer game franchise, has switched on a dynamic digital out of home campaign to celebrate the launch of the second game in its zombie parkour Dying Light series, Dying Light 2: Stay Human.

The dynamic OOH campaign, devised by Open Outdoor in partnership with Techland, aims to capture the attention of gaming fans across the UK using dynamic creative executions that bring to life the game’s day and night cycle.

The campaign creative starts with a peaceful daytime scene which switches over to a dark and brutal night-time execution as the clock reaches 50 minutes after sunset each day.

A post-apocalyptic game story-driven with emphasis on action, the game is the sequel to 2015’s Dying Light, released on 4 February for Microsoft Windows, Nintendo Switch, PlayStation 4, PlayStation 5, Xbox One, and Xbox Series X/S.

The campaign kicked off on 31 January and runs for two weeks across Roadside D6s in key cities including London, Birmingham, Manchester, Glasgow, Liverpool and Edinburgh, on University D6s nationwide and on B48s in London.

It will be supported with five wrapped London buses featuring LED lighting.

Techland is a worldwide AAA game developer and publisher. It is the creator of critically acclaimed titles such as Dying Light, Call of Juarez and Dea.

Tom Hatch at Open Outdoor said: “We’ve worked with Techland to layer multiple formats in the campaign that bring the very distinctive day and night features in the game play of Dying Light 2: Stay Human cycle to life in our real-world advertising.

“Alongside fully wrapped London buses with LED lighting, the campaign combines reach with engagement, immersing gamers into the game and making it hard to miss.”