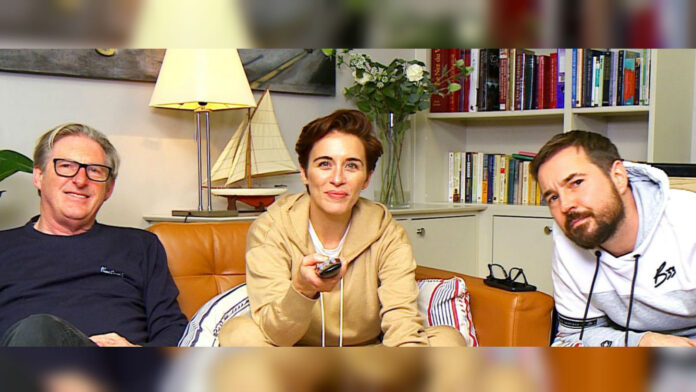 The multi award-winning Gogglebox returns once again with a very special celebrity edition for Stand Up To Cancer.

Line of Duty’s Ted Hastings, Kate Fleming and Steve Arnott will be sharing the famous sofa as part of Channel 4 and Cancer Research UK’s Stand Up To Cancer campaign on Friday 23 October.

The TV review special will see Adrian Dunbar, Vicky McClure and Martin Compston join the likes of Celebrity Gogglebox favourites Mo Gilligan and Babatunde Aleshe as they pass judgement on a vast array of TV goodness.

Between their own cutting remarks, tears and laughter will be the views of Britain’s favourite opinionated viewers; the regular Gogglebox households including best friends Jenny and Lee, Blackpool brother and sister Pete and Sophie, and the Siddiquis.

“It’s an honour to be part of the esteemed Gogglebox line up especially when it’s raising money for the phenomenal work Stand Up To Cancer do” Dunbar said.

“Being able to watch a load of great – and some questionable – TV alongside Vicky and Martin is an added bonus.”

Vicky McClure added: “I am a big fan of Gogglebox, really chuffed to be asked, and quite surreal, to be part of the Stand Up To Cancer special with Adrian and Martin. We hope we can help raise much needed funds for such an amazing cause.”

Craig David said: “I’m thrilled to be doing the Gogglebox Stand Up To Cancer special with KSI. It’s such an amazing cause and such a fun show to do.”

Martin Compston commented, “We had such a laugh filming Gogglebox together and we’re delighted to be able to play a small part in the Stand Up To Cancer campaign.

“At a time when cancer affects more of us than ever before, we really need to pull together and play our part in raising vital funds.”

Launched in the UK in 2012, Stand Up To Cancer is a joint national fundraising campaign from Cancer Research UK and Channel 4 that brings the UK together to speed up progress in life-saving cancer research.

To date, the campaign has raised more than £62 million, funding 52 clinical trials and projects, involving over 11,000 patients across the country.