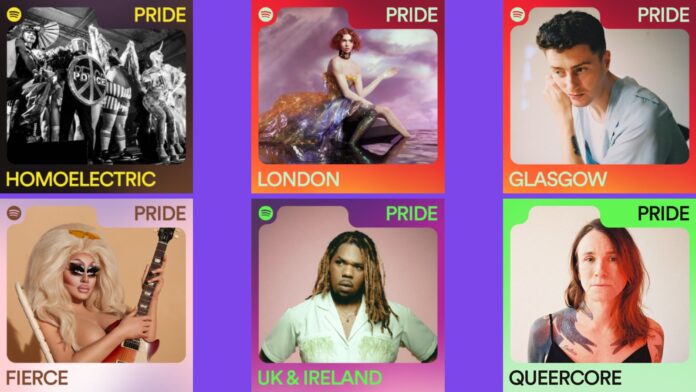 This Pride, Spotify is encouraging the queer community to make noise, make their presence known and make their own rules with a single rallying cry: CLAIM YOUR SPACE – as it brings back its Pride Hub.

With a series of month-long activations, this global campaign is aimed at creating space both physical and digital for the LGTBQIA+ community.

To celebrate, Spotify UK/IE is bringing back its annual, hotly anticipated Pride hub – collaborating with the UK and Ireland’s most fabulous LGBTQIA+ creators, venues and culture brands on a host of takeovers across some of its most popular playlists.

The hub will include the launch of a new flagship playlist PRIDE: UK & Ireland which will amplify LGBTQIA+ voices from the UK and Ireland all year round. The playlist invites listeners to ‘Claim your space this Pride’.

Some of the exciting playlist takeovers include:

Fiorious, friends of Glitterbox taking over Queer Spaces alongside Horse Meat Disco, said: “Amplifying queer voices and queer spaces is important not just for artists and club nights, but especially to help queer kids find voices and stories that reflect their own.

“Pride is a reminder of our collective struggle of the last 50 years, and also of the important work still to be done to protect our community around the world.”

As the world’s most popular audio streaming service, Spotify said it has the unique ability to inspire and drive positive change through the power of audio.

For Pride 2021, Spotify UK/IE is using that power to amplify and support queer creators and venues across four major cities in the UK/IE: London, Manchester, Glasgow and Dublin.

Each city will have its own dedicated playlist within the Pride hub.

Spotify is also partnering with and highlighting trailblazing queer venues, clubs and spaces from across the UK that have been historically underrepresented, to create their very own Pride playlists for the first time including:

Punka said, “At Punka gigs I wanted to create a safe space for people to see diverse lineups and queer bands.

“Punka has been one of the official after parties for Bristol Pride since 2018 and all of our shows have this incredibly loving sense of community and safety that I’m so ridiculously proud of.

“Being part of Pride is a way to make sure everyone is represented no matter what their taste is. I’ve always wanted it to be the rockin’ badass night out that treats you like family!’

Spotify said it will continue to celebrate Pride throughout the month of June with additional global initiatives, including:

The music streaming company said that the aim this global campaign is a desire to permanently create more space for queer representation both on its platform and in its culture.