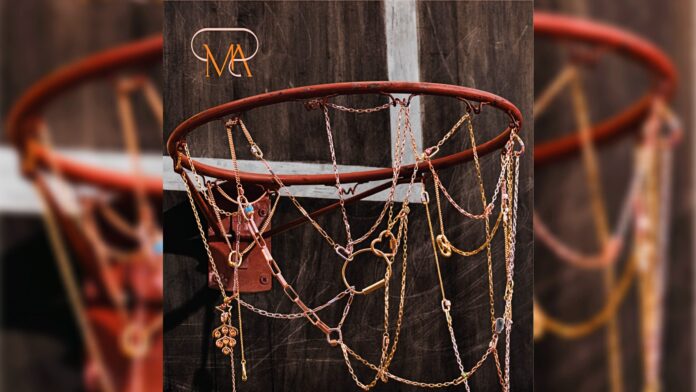 Something Different has created ‘Jewelry at Work,’ a multi-faceted, non-traditional campaign for innovative fine jeweller Marla Aaron which runs throughout fall.

The latest work, breaking 15 October, highlights favourite videos of Marla’s ‘Jewelry at Work’ with bespoke sound effects and an animated ‘What would you do with it?’ tagline, which is running in the digital edition of The New York Times and on Pinterest.

‘Jewelry at Work’ features striking visuals showcasing Aaron’s necklaces and bracelets in ‘the wild’ as they are literally put to work – for example replacing the netting of a basketball hoop, securing a chain-link fence, or holding up a park swing.

The campaign demonstrates Something Different’s principle that ideas, when they tell a great story, can live on any platform.

It kicked off with a city-wide interactive treasure hunt series of eye-catching posters in Manhattan and Brooklyn, backed by social media posts, and ads.

The first elements launched during New York Fashion Week 2021 and to coincide with the 2021 Met Gala.

Marla Aaron’s imaginative and interactive campaign inspire curiosity and convey a sense of adventure around the brand, built on a larger strategy and positioning developed by the agency.

The aim of the new campaign was to demonstrate what makes Marla Aaron unique among jewellery brands; to celebrate the tactile, collectible, interchangeable nature of the entire collection” and to prove that “precious” and “playful” can co-exist.

Something Different’s campaign brings this updated strategy to life, while showcasing the jeweller’s eclectic, hardware-inspired designs in a bold and often unexpected manner.

The campaign was shot on location in Red Hook, Brooklyn by Scottie Cameron, whose recent work includes campaigns for Vogue Hong Kong and Bvulgari, Johnnie Walker and Puma.

For the treasure hunt, three branded stickers with QR codes were placed in Manhattan locations that were meaningful to the jeweller.

These included on the corner of Grand and Allen streets, where Aaron’s career began; Fifth Avenue and East 43rd Street, where posters were prominently displayed; and the Tompkins Square Park basketball court, where one of the most arresting images from the campaign was shot.

Led by clues on Aaron’s Instagram Stories, thousands of ‘Jewelry Hunters’ scoured the city, while followers and influencers spread the word.

The response so far has been overwhelming. All three prizes were claimed within 79 minutes, while fans around the globe – from Kolkata to Hong Kong and Amsterdam – begged Aaron to bring her treasure hunt to their cities.

Something Different co-founder Patti McConnell said: “It’s not often you work with a brand that has such a defined and original personality.

“So, it was a pleasure to get to play with Marla’s team again and create advertising that not only works hard, but so beautifully captures her spirit of playfulness, too – all while celebrating the beauty and craftsmanship inherent in her pieces.

“It was a wonderful reminder of the amazing skill and artistry of humans and our capacity for fun and joy. Something we could do with remembering these days.”

The campaign also represents a celebration of the grittiness of NYC and how it has inspired Marla almost more than anything else in her work, with the OOH distributed via gorilla postings, in the wild – targeting Soho, Tribeca, Lower East Side and East Village, Williamsburg, Downtown Brooklyn and Fort Greene, DUMBO, Chelsea, Greenwich and West Village, Upper East Side, BK Heights and Prospect Heights.

“MAJ has been growing fast as a company and recognised the need  for its first  brand campaign. Brand campaigns have so many platforms to play with today and Marla Aaron Jewelry is showing how it can be done”, adds McConnell.

“Great ideas, when they tell a compelling and authentic story, can live on any platform”.