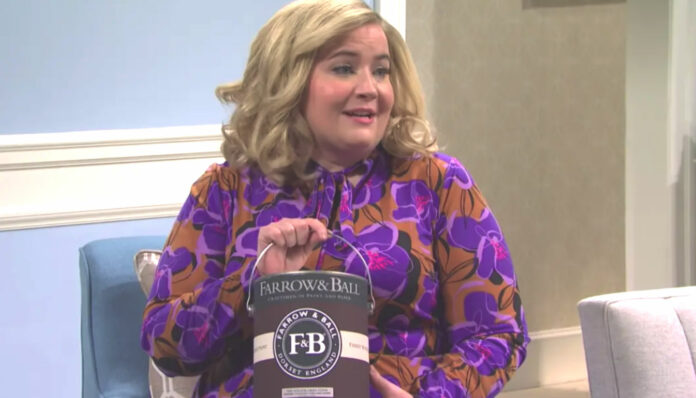 The Dorset-based firm’s new agency BMB seized on the moment by ordering its own tongue-in-cheek full-page ad in the New York Times.

In the SNL sketch which aired 3 November spotted by Farrow & Ball President, based in the US: comedienne Aidy Bryant shows off her freshly painted home to her brother and sister-in-law, played by SNL regular Beck Bennet and guest host actress Kristen Stewart.

Despite not being a commercial product placement, the paint brand is referenced numerous times throughout the 4min 18sec piece.

Stewart points out that Bryant’s character is pronouncing colour “like the word color but with a ‘u’ in it” which then kicks off a series of gags with exaggerated pompous pronunciation such as “He just wants me to live in squa-lor”.

Named as “English Roast No. 30”, the colour is described in the ad as: “A rich and good hum-oured hue with subtle hints of bone-dry satire and a lingering aftertaste of charred British beef. It’s not just paint, it’s Farrow & Ball.”

Anthony Davey, CEO at Farrow & Ball explained: “After we saw the show and put it on our socials, Kent Sublette, who is a senior writer at Saturday Night Live SNL tweeted back: ‘Couldn’t have written this unless I truly loved Farrow & Ball!’

“And in his tweet he’s got a picture of a collection of Farrow & Ball sample pots. And says, ‘Thanks for having a sense of hu-mour!’ so he’s apparently a customer of ours!”

Now in its 45th season, Saturday Night Live plays to audiences of more than six million, with many more watching sketches online afterwards.

Lever said: “The advertisement was turned around in just one day. The key to any tactical ad is speed. It only seemed right for a British brand to use light-hearted British wit in the ad.

“Whilst Farrow & Ball doesn’t always use jokes in their creative, it is still a warm and human brand. Embracing humour is just another facet of that.”

As a big fan of SNL, Lever added: “Like most Brits we are aware of how big SNL is as a show and the importance of it in US comedy, it’s birthed some of my favourite actors.”