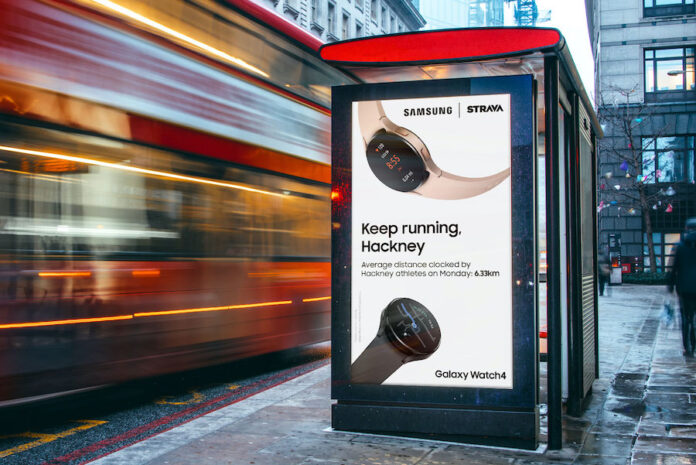 RAPP UK and Samsung UK have teamed up with exercise tracker app Strava, for a new campaign to support the newly launched Samsung Galaxy Watch4 Series.

The campaign encourages Samsung customers to get out there and participate via a raft of different routes around the UK, driving awareness and desire by demonstrating just how effectively the new Samsung Galaxy Watch4 can track their health and fitness, and stay on top of their overall wellness.

It begins with an innovative digital out-of-home strategy across the UK, incorporating a media first with Strava data, to encourage people to get active and make them feel part of their wider local community.

These executions will feature upbeat local messages for added motivation, like “Power your workouts, Croydon” and “Ride on, Swindon” followed by real data uploaded to Strava by athletes in the area.

The localisation and personalisation from Strava goes even further, including builds such as “Thursday’s total average workout duration for Croydon athletes was 47m 57s” or “Total distance covered by Swindon cyclists on Monday was 11,424km”.

By viewing their workout as part of a collective effort, people will be spurred to up their exercise levels.

For a chance to win, users need to clock up four hours’ worth of any type of fitness over a four-week period.

Al Mackie, Chief Creative Officer at RAPP UK said: “Our audience is plugged in to the idea of the ‘quantified self’.

“This refers to the cultural phenomenon of self-tracking with wearable technology and allows them to gain knowledge around their health and wellbeing through data.

“It’s really important for them to understand how their mind and body is performing, so they can feel more in control.

“The partnership between Samsung and Strava tunes into this trend and brings it to life in a relatable way.”

Sharon Hegarty, Marketing Director at Samsung UK and Ireland said: “This is such as exciting campaign, being able to use real data from our partners at Strava to personalise and localise our marketing.

“This campaign not only highlights the fitness tracking capabilities of the Samsung Galaxy Watch4, but also motivates our customers to get the most out of their fitness journey with Samsung.”

With seamless Strava integration, heart rate tracking, and even Body Composition tracking, the new Samsung Galaxy Watch4 tracks your health throughout the day and night, so you can literally see what you’re made of and stay on top of your overall wellness.

Media planning and buying was handled by Starcom.