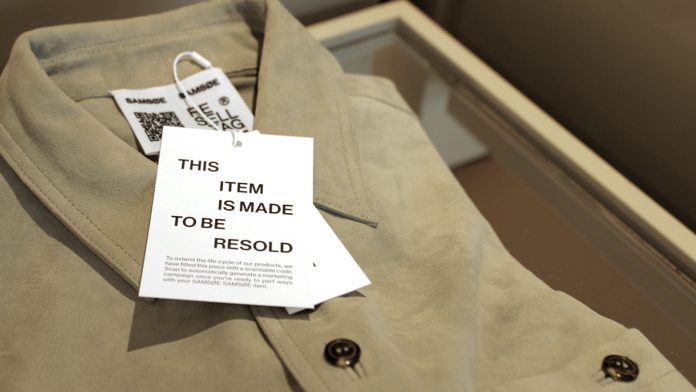 To help with the recycling of its clothing, Scandinavian fashion brand Samsøe Samsøe has launched the Resell Tag – a tag stitched into items of clothing which bears a scannable QR code to make it easier for shoppers to resell clothes.

The fashion industry, one of the world’s most polluting industries, is responsible for 10% of global CO2 emissions.

Worse, clothing is being worn less and less. The average usage of an item of clothing before it is left in the back of the closet has decreased by more than 85% since 2002, according to data from Euromonitor.

Meanwhile, some 33% of shoppers perceive a piece of clothing as “old” after having worn it just three times, other studies show.

As a result of all this, $500 billion is lost each year because of under-wearing and failure to use clothing we have grown tired of, Greenpeace estimates.

The groundbreaking solution, devised by Uncle Grey, ensures the clothing gets properly worn – if not by its original purchaser, then by someone else who buys it on the resell market – by making reselling much easier which, in turn, will help reduce clothing ending up ignored at the back of a closet.

The Resell Tag is a scannable code on pieces of clothing that activates a series of automatic digital actions.

Once the tag is scanned with a smartphone, a connection with Meta’s marketplace, Facebook and Instagram is automatically made and a mockup of an ad based on the data points from the clothing (style, size, colour, age) is automatically created, including images.

Once a user has previewed the auto generated copy and added their desired price for the item, the ad is then automatically published, creating a hyper local campaign to promote the item to put it in front of potential buyers.

The Resell Tag is being launched across eight different styles in the Samsøe Samsøe collection and will be rolled out across a wider range of items in the coming year.

The launch is being supported through in-store activations, SoMe and featured on the brand’s own digital channels.

There will also be traditional activity geared towards lifestyle and fashion brands.

Peter Sextus, CEO Samsøe Samsøe said: “The life cycle of our products is a central part of becoming a more responsible brand and the Resell Tag is an integral part of that journey.”

Lars Samuelsen, Creative Chairman & Chief Strategy Officer, Uncle Grey, said: “When you think of reselling clothes, most of us are stopped by the process of doing so.

“The Resell Tag solves a very real problem and could become the solution for the fashion industry.”