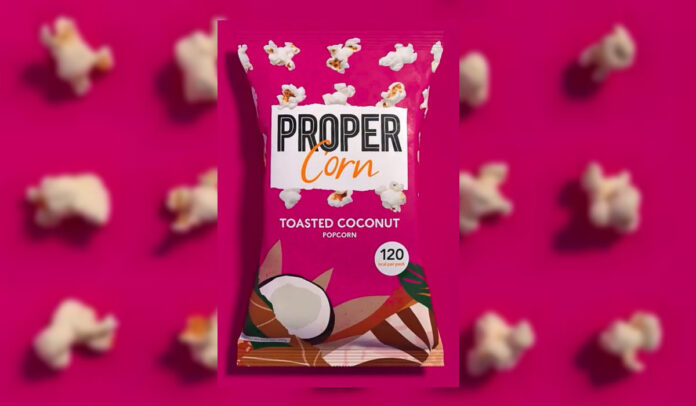 The Popcorn Done Properly campaign was created during lockdown in three weeks and will be released on 4 June. The firm said it marks an important step in Proper’s growth ambition.

The campaign is a natural response to current nationwide consumer trends, the firm said.

With the UK in lockdown, households have been enjoying more time in together, with shared TV viewing growing by 37% [Thinkbox, May 2020].

Alongside this, snacking has boomed, with the popcorn category in particular benefiting from a 14.4% boost in sales [Kantar, w/e 22.03.2020].

Popcorn Done Properly marks the evolution of the brand’s award-winning ‘Project Pattern’ creative idea; which started in 2015 with the wrapping of Routemaster buses across London.

While the core idea has stayed the same, the way Proper has engaged and excited audiences has evolved over the years, Proper said; with TV being the next major step in the brand’s journey.

The campaign is set to deliver over 60m impressions over June and July.

Proper’s media agency, Yonder Media, has developed a strategy that focuses on TV and VOD in an exclusive deal with Sky Media.

The targeted approach taps into the behaviour of core Propercorn consumers; who over-index in their use of on-demand and subscription streaming services.

Ed Cox, Founder of Yonder Media said: “With the increase in shared TV viewing moments, we worked with Propercorn to ensure we tapped into occasions when viewers will be enjoying and sharing snacks, and in particular popcorn.”

Collaborating with creative agency U-Dox – known for its diverse brands including adidas, Clarks and MINI – the ad was built to reach a Gen-Z and Millennial audience.

Using Proper’s familiar, striking pattern mixed with an onomatopoeiac overlay to further engage the viewer with the brand name.

Jack Reynolds, Associate Creative Director at U-Dox, said: “The project timeline and social distance really demanded that we quickly came up with an creative and effective solution.

“We formed a trusting bond (on Zoom) that enabled us to go with our gut and craft something that embodies the bold and playful essence of the brand.”

Cassandra Stavrou MBE, Founder of Proper, said: “The Popcorn Done Properly campaign is an ambition that we set our sights on during a time when we know there is an appetite for healthier, great-tasting snacks.

“We approached this as we always have done by taking inspiration from the fashion and design industries to create an original result.

“It’s been truly fantastic to see the team come together, battling the challenges of physical distance during lockdown.

“There has been all-round dedication to pull off this creative.”

Viewers can watch the ad from 4 June on SKY network channels. It’s also airing on VOD Sky Boxsets including Brassic Season 2 and Gangs of London from 8 June.