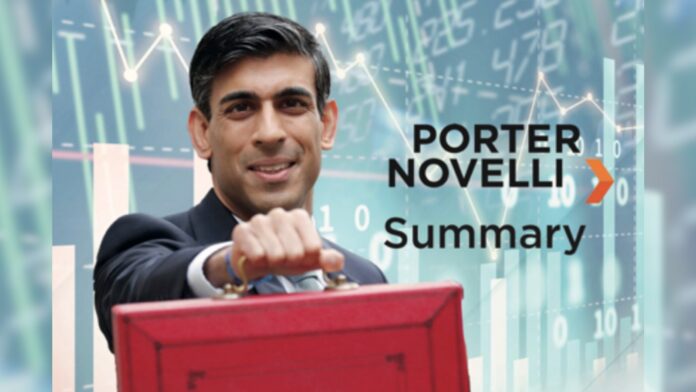 But did what the Chancellor SAY really match up to what the Government will DO in the months ahead?

Porter Novelli‘s Senior Account Executive, Anya Neill, has been pouring over the key words and actions from possibly the most important budget statement since the global pandemic began…

“Our credibility comes as much from what we do as what we say”… Those were the words of Rishi Sunak as he revealed the winter Budget looking into a “new age of optimism” for the UK.

We help clients close the say-do gap across all their audience groups, so we took a closer look at how the budget intentions set out by the government are being supported by tangible actions.

Here is a summary of the key announcements:

The Chancellor came under scrutiny in the media as he delayed £2bn in annual spending on (R&D).

This, controversially, came as he committed to fund a new advanced research body that was the idea of ex-No 10 adviser Dominic Cummings.

The delay is also likely to push back the Conservatives’ manifesto commitment to spend 2.4% of GDP on R&D, as Sunak committed just 1.1% of GDP by 2024.

The government’s previous commitment of £22bn investment will now be met in 2026-7, opening their ‘say-do’ gap.

Some favourable announcements, however, included:

As demand for goods post-Covid-19 has proven higher than supply chains anticipated, with roll on effects for various businesses and sectors, the Chancellor highlighted:

As many retail, entertainment and hospitality venues were forced to close their doors during the pandemic, Rishi Sunak announced:

For the Beers, Wine and Spirits (BWS) industry, there was a sigh of relief with a further freeze in alcohol duties until a proposed reform in 2023.

Say: “Levelling up across different regions”

Say: “Laying the foundations for a strong recovery and greener economy”

With much pressure on the government’s green strategy ahead of COP26, Rishi Sunak’s speech and budget “red book” gave much less space to climate change and the UK’s net-zero target.

The red book uses the word “climate” only nine times, against 31 last year, with seven appearances for “net-zero”, down from 17. The announcements included:

Despite some notable progress, the renewed freeze in fuel duty was a major blow to the UK’s green credentials, as critics argued that the Chancellor had not gone far enough in the government’s net-zero commitments, ahead of the Cop-26 Summit in Glasgow next week.