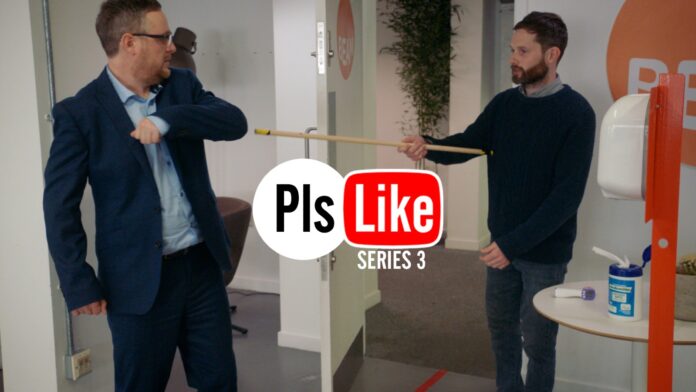 Pls Like, the award-winning mockumentary series spoofing online influencers, is to return for a third series.

The BBC said the series will be produced by Baby Cow Productions and directed by Simon Bird (Friday Night Dinner, The Inbetweeners), marking his TV directorial debut.

The six-part (6×15”) comedy for BBC Three will land as a boxset on BBC iPlayer on Sunday 24 January 2021, with a BBC One broadcast to follow.

All previous episodes from Series 1-2 will also be made available to watch on iPlayer as well.

The award-winning comedy, which first launched on BBC Three in 2017, returns to investigate how the influencer industry has been changed by an unprecedented pandemic.

Struggling documentary-maker Liam Williams teams up once again with online talent agent, and self-professed ‘Influencer Tsar’, James Wirm (Tim Key) to find out what it takes to become a successful influencer in a post-pandemic world.

Hoping that what he learns can help him attract a younger audience for his politically charged passion project – a time-travel movie called ‘Squad Coals’ – Liam undertakes a series of challenges, including helping a greasy spoon appeal to hip Instagrammers, saving a struggling art gallery with a TikTok exhibition, and commentating on a huge YouTuber boxing match.

But as Liam proceeds with his tasks, he is distracted by the cosy relationship developing between Wirm and the government’s new Minister for Influencers, Mungo Slate (Graham Dickson), as well as rumours of a scandal involving a TikTok mega-star and senior British politician.

“It was a privilege to be able to make this series with such a talented and epidemiologically-conscious cast and crew”, said Liam Williams.

“I stayed metres away from everybody else, washed my hands constantly, and didn’t hug anybody the whole time. So just a normal shoot for me really.”

Ben Caudell, Commissioning Editor, BBC Comedy said: “After a year when we’ve all been online more than ever, Liam’s brilliant satire on influencers and the influenced couldn’t be more timely.

“It’s a comic must-watch, if you can muster the strength to drag your eyes off your phone for a few fleeting moments.”

The series was nominated for a BAFTA in 2018 and won the Broadcast Digital Awards for Best Short Form Comedy in the same year.