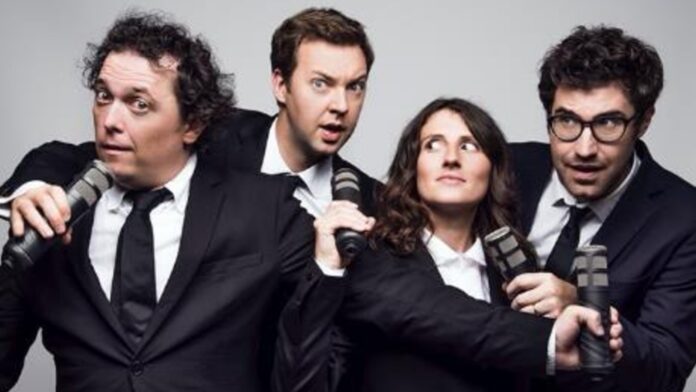 No Such Thing As A Fish, the award-winning podcast from the team behind BBC Two’s QI, is set to host a live-streamed one-off special in aid of Comic Relief from 12 to 13 March 2021.

To mark Comic Relief’s 35th year, the No Such Thing As A Fish team will be hosting 35 guests for 35 minutes each – a whopping 1,225 minutes of live broadcast, and over 20 hours of non-stop fun-fact chit-chat.

No Such Thing As A Fish

Richard Curtis said: “The QI team has really out done themselves with this brilliant idea – 35 guests to mark 35 years of Comic Relief is an extraordinary feat to pull off.

“I’m nervous to be part of such a clever line-up and will spend the next week dusting off my Comic Relief trivia.

“It’s going to be a lot of fun and I hope will help raise lots of money for Red Nose Day along the way.

“I want to say a huge thanks to the QI team for their herculean efforts in bringing us all 20 hours of non-stop fund-raising entertainment.

“They have some amazing guests, and I am sure a ridiculous amount of interesting facts to enjoy from home.”

No Such Thing As A Fish said: “We’ve spent seven years messing around and only recording for an hour or two at a time.

“This year we are thrilled to be pushing ourselves to the absolute limit in the service of one of the best causes around. We aim to read out every fact in the world at least once.”

No Such Thing As A Fish is one of the world’s most listened to podcasts, with over 300 million listens and an average of one million listeners per week.

Now in its seventh year, No Such Thing As A Fish is at the forefront of the British podcast scene.

The team have performed live across the world – including selling out the Sydney Opera House and the New York Comedy Festival – as well as writing three books, making two series of the hit BBC Two show No Such Thing As The News and releasing a podcast exclusively on vinyl in a fruitless attempt to be on trend.

Comic Relief’s Red Nose Day is back on Friday 19 March 2021 and will aim to bring the UK together to show just how powerful humour can be through the toughest of times.

It has never felt more important to raise smiles and money for those who are struggling more than ever, as the continued impact of Covid-19 brings unprecedented challenges to many.

Donations made to Red Nose Day during the 20 hour podcast marathon will help tackle issues including homelessness, hunger, domestic abuse, and mental health problems, all of which have been exacerbated by the covid-19 pandemic, in the UK and around the world.