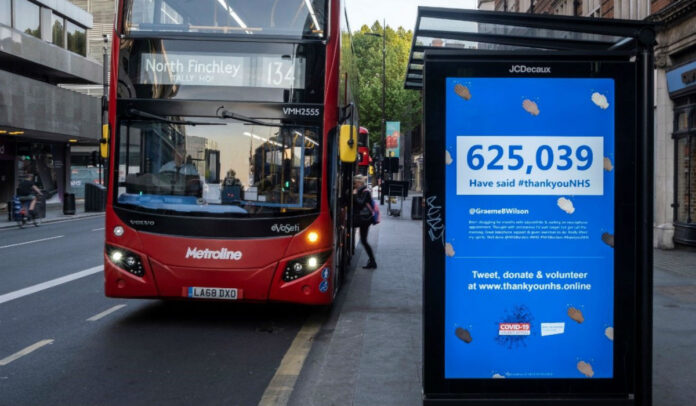 A new campaign that super targets NHS staff and care workers across the UK has been launched, featuring a clap-counter.

The aim of the campaign is to display the digital outpouring of thanks made across Twitter towards them.

The campaign was devised by creative agency Mc&T and executed in partnership with location marketing specialist Posterscope.

It features on outdoor sites around major UK hospitals and shows the tally of social thanks every day at 7am and 7pm GMT; targeting shift change-overs for staff arriving and leaving major hospitals.

Over the next few weeks the campaign will target major hotspots for COVID 19 patients and their carers; including University College Hospital, Royal Hospital Chelsea, Bristol Royal Infirmary and several others across London & the UK.

A website version – www.thankyouNHS.online – tracks digital ‘thank yous’ that take place on Twitter in real time and aggregates them to give a total digital counter of ‘claps’.

Since 8pm on Thursday 26 March the clap-counter has registered nearly 700,000 digital displays of gratitude for the NHS; with the number ever-growing.

The website allows users to further show their support for the NHS by either clicking to donate money to the NHS Charities Together;the umbrella organisation set up to represent all the 250 NHS charities.

Users can click through to donate to the established NHS Charities Covid-19 Urgent Appeal fund or can choose to click to volunteer via the Royal Voluntary Service.

The initiative creates a central point to galvanise the support of the UK behind the NHS.

By broadcasting the collective digital thanks, it’s hoped more people across the UK will be implored to offer their support; either by monetary donations or by donating their own time as volunteers.

Ellie Orton, Chief Executive of NHS Charities commented, “The UK public as a whole has already responded magnificently to the need of the NHS.

“Public shows of thanks such as the 8pm ‘Clap for our Carers’ campaign and the rush to volunteer provide an enormous amount of motivational and emotional support to NHS and care workers at this difficult time.

“We hope that with the launch of ThankYouNHS.online we can also display the digital support for the NHS; and use this to further communicate to care workers that we recognise and are thankful for their vital contribution.”

Paul McEntee, for creative agency Mc&T who devised the campaign said: “We were Inspired by the physical displays of appreciation that have taken place since the first ‘Clap for Carers’ and wanted to show this digital as it grew.

“We don’t know what carers and key workers are going through in those hospitals across the UK; but if we can reach them at shift-start and shift-end with a message of support, maybe that might lift them; and remind them the whole nation is thinking of them.

“It’s important that we continue to show our frontline workers how much we appreciate them” they said.

“Sharing these thousands of Twitter messages in real time across digital out of home screens close to their workplaces will help to do that.

“Digital out of home is proven to amplify and accelerate social media campaigns; as people increasingly engage with and share outdoor ads online. So we hope this encourages yet more people to share their support on Twitter.”