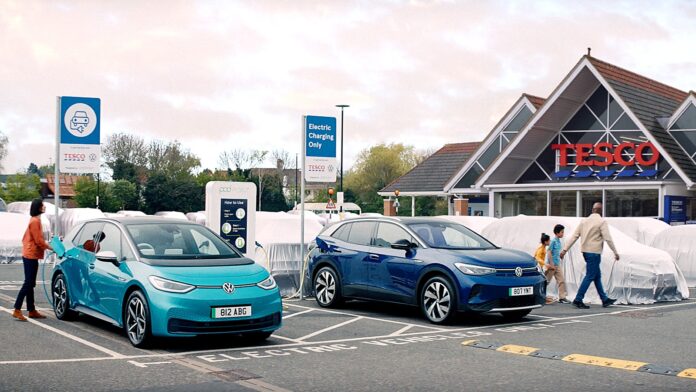 Adam&eveDDB has created a new campaign for Volkswagen, entitled Sheets, which highlights the fact that the car brand is delivering free charging points at 400 locations nationwide – giving the whole country a much-needed boost towards cleaner driving for all.

Crucially, these electric charging points are available for all car brands – even those they’d rather not show on TV.

The ad kicks off in a car park, with a man struggling to locate his car as they are all covered by sheets – with the exception of a Volkswagen, which drives off.

We then see a woman who cannot locate which car is her taxi as it pulls up, because they are all hidden by the sheets.

The mystery continues, becoming increasingly ridiculous, until we find ourselves in a Tesco car park and see the Volkswagen driver pull up to charge her car thanks to the Pod Point charging station, with the voiceover explaining that the electric charging points are available even to the car brands they’d rather not show on TV.

Sarah Cox, Head of Marketing at Volkswagen Passenger Cars UK said: “Volkswagen literally means the people’s car and we believe that everyone should be able to drive electric cars.

“That’s why we’re so proud of our partnership with Tesco and Pod Point because we’re helping build the nation’s charging infrastructure for everyone.

“Instead of keeping the chargers for Volkswagen drivers only, we have ensured anyone can top up with free, green energy, whatever car brand they choose to drive.”

Antony Nelson, Executive Creative Director, adam&eveDDB added: “This is a fun and light-hearted spot – which, despite the tone, delivers a serious message thanks to good, old-fashioned story-telling.

“These chargers aren’t just free for Volkswagen drivers. They’re free for everyone, even the car brands Volkswagen (for obvious reasons) would rather not show on TV.”

A parliamentary review recently acknowledged the UK has a ‘mountain to climb’ to meet its EV targets, mostly because of the lack of charging infrastructure.

According to YouGov, concerns over battery life and charging infrastructure are the main reason people aren’t buying EVs.

The partnership will lead to the creation of over 1,600 new chargers at 400 Tesco stores.