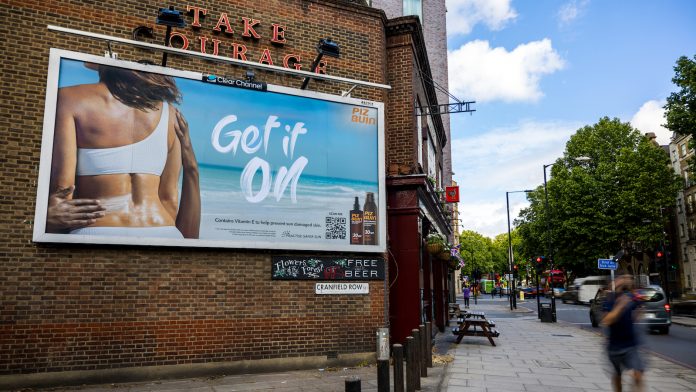 The innovative ad changes from day to night, using UV lighting after dark to demonstrate the damage sun can cause to unprotected skin.

Placed in Southwark, London and running until 4 July, the billboard uses overhead lighting with special bulbs to activate the night UV print.

As the sun sets over London, the model’s skin suddenly shows the effect of too much sun and new messaging appears, with the primary ‘Get it On’ strapline changing to ‘Should’ve Got it On’.

The printed copy is overlaid with clear UV paint in a stencil application so it is undetectable during the day. Once the overhead UV lights come on at night, the UV paint becomes visible.

Wesley Lyne, Head of Design and Production at Johnson & Johnson Limited, said: “The creative idea was born out of a simple insight: many of us apply inadequate amounts of sun cream during the day, only to realise at night that maybe we didn’t protect ourselves as well as we could.

“A lot of people don’t know how to apply sun cream properly, which is why we are educating users in the overall campaign on the ‘2-2-2’ application guidelines.

“Two tablespoons, applied two times before going out and every two hours whilst out. We wanted to get the message across in an impactful and purposeful manner.”

The billboard forms part of the wider Piz Buin ‘Get it On’ campaign, which encourages shoppers to ‘Practice Safer Sun’ and is the brand’s first major UK above-the-line campaign in more than five years.

Inspired by the work of Johnson & Johnson UK’s CAST (Casting Aside Stereotypes Today) initiative founded in 2017, which raises awareness of the role of unconscious bias in marketing decision making, the evolved brand positioning and visual identity showcased in this new campaign strongly demonstrates the company’s commitment to ensure that its brand campaigns and advertising represent the diversity of its consumers.

Through initiatives, events and new tools for colleagues, the CAST team’s mission is to lead by example and make diversity and inclusion key to how Johnson & Johnson UK works every day as an industry champion with a culture that inspires inclusive and diverse advertising to drive stronger connections with the consumers it serves every day, in every community, across its portfolio of household brands.

The billboard was created in collaboration with media agency UM and OOH specialist agency Rapport.

Enyi Nwosu, Chief Strategy Officer at UM London, said: “Summer is here and temperatures are rising, in the UK and abroad.

“That means more potential for sunburn and skin damage so we’re working to remind Brits how best to use sun cream to protect themselves.

“This ad is designed to open the eyes of the unwary to the risks. UV technology means we could push the boundaries of OOH execution.

“Shining a light on the problem and inviting the audience to stay safe in the sun, through a standout piece of creative.”