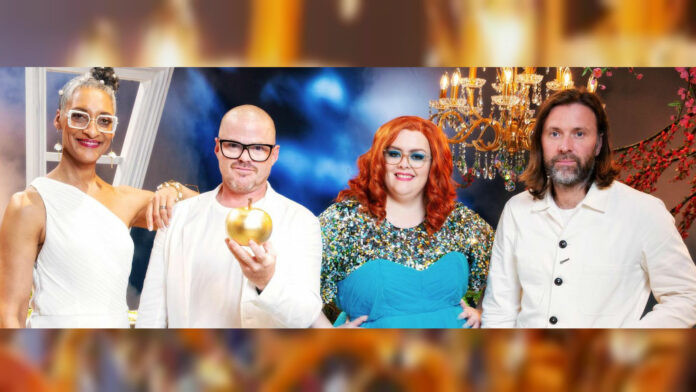 The new six-episode series, presented by comedian and foodie Jayde Adams, is an innovative and imaginative food competition set on the world’s first edible set.

In a culture where many British families eat the same meals every week, this show aims to inspire viewers to turn everyday dishes into Crazy Delicious creations.

Each week, three passionate and inventive cooks work magic with commonplace ingredients, such as the humble carrot, some of which they will pick, pluck and snip from an enchanted garden on the stunning Crazy Delicious set which also contains edible blossom, chocolate soil, and a drinkable babbling brook.

Inspired by the vibrant and viral world of #foodporn, the competition challenges the cooks to create dishes that are both a taste sensation and a feast for the eyes.

The Food God trio will apparently sit amongst the clouds and judge which ingenious cook will reign victorious and be awarded the golden apple.

Together, the gods judge the concept, visual appeal and taste of each dish, with their complement of expertise combining to choose their favourite creation.

While British chef Heston Blumenthal is known for putting science into cookery to create surprising and elaborate dishes, famed American chef Carla Hall is passionate about soul food and cooking with love, with renowned Swedish chef and restaurateur Niklas Ekstedt valuing the simplicity of ingredients and traditional techniques.

As the competitive cooks create new takes on recognisable meals such as chicken pie and pizza, presenter Jayde Adams oversees the garden, speaking to the competitors about their recipes as they go about making their extraordinary culinary innovations.

Heston Blumenthal said: “In Crazy Delicious we’re asking for dishes that not only taste great but are also visually spectacular, emotionally powerful and nostalgic so it’s incredibly tough!

“They say fortune favours the brave and to be truly creative requires bravery and a willingness to fail big time.

“The cooks in Crazy Delicious were certainly fearless. I’ve spent my career trying to perfect these kinds of dishes and I know from experience that creativity and perfection do not always sit comfortably together.

“I was amazed at how ambitious some of the cooks were. During the judging process, Carla, Niklas and I got to try some spectacular looking dishes that provoked different emotions and memories for each of us, which made making a final decision even more difficult at times!”

Carla Hall said: “Being a part of Crazy Delicious has been such a joy, especially working with Heston and Niklas.

“We have been given some truly delicious dishes to try and, at times, we’ve had our minds blown. I think the viewers are going to be really impressed by the crazy twists on those meals we’re all so used to making on a daily basis.”

Niklas Ekstedt added: “I loved being part of Crazy Delicious, it’s such a spectacular production. I’ve been so impressed by the dishes we’ve seen and tasted, particularly with how the cooks were able to infuse flavours and techniques from a variety of cuisines. I didn’t really expect that from British cooking.”

Jayde Adams commented: “This show is like nothing you’ve seen before, from the incredible, edible set to the crazy and delicious meals created by our cooks.

“I love food and working with real-life food gods Heston, Carla and Niklas has been brilliant, I’ve learnt so much as well as being able to try so much wonderful food.

“I said to the universe a year ago that I wanted to host a food show and here it is! I feel like one of the luckiest women in the world. I cannot wait for you all to see it.”

Crazy Delicious will air on Channel 4, and be available on Netflix worldwide (excluding UK), in early 2020.