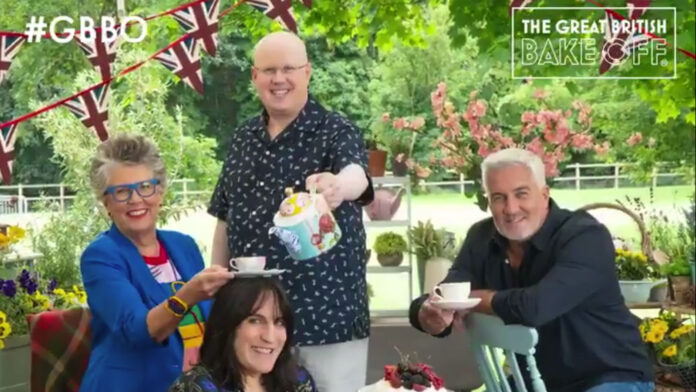 The Great British Bake Off returned to our screens last night attracting an impressive audience of 6.9 million viewers.

But did you see the opening skit with new team presenter Matt Lucas sending up the PM in a hilarious daily briefing?

Check it out below. Initially, the comedy sketch went down well, with Lucas a bit of a dead ringer for Prime minister Boris Johnson.

Welcome to a new series of The Great British Bake Off – and a big hello to our new presenter Matt Lucas! #GBBO pic.twitter.com/0sa8NxTJtE

However, the PC brigade eventually arrived to vent their ire at anyone who attempts to resurrect the nation’s funny bone from a year of basically crap Covid news.

We thought it was funny and well done – crikey, we all need a laugh right now.

Anyways, back to those viewing numbers. Channel 4 said viewers hit a peak of 7.9m, making it the show’s biggest ever overnight launch audience to date since switching from the BBC.

Bake Off is back

Last night’s launch show pulled in the biggest audience of any channel from 8.15pm to 9.45pm. It had the highest share of 16-34 year old viewers in its time slot; with over half of this young audience watching TV at the time tuning in (56%).

Its significant share of young viewers makes it the biggest programme on TV this year among 16-34 year olds; excluding addresses from the Prime Minister and The Queen, the broadcaster said.

Ian Katz, Director of Programmes said: “It was one of our top priorities to get Bake Off on air this year. I’m delighted the new series has brought some much-needed cheer to so many people.

“After all the grimness and hardship of the last few months, it felt like the country badly needed the reassuring warmth and wholesomeness of the Bake Off tent – a place where the worst thing that can happen is a pineapple upside down cake ending up on the floor.

“Huge thanks to Prue, Paul, Noel and Matt and everyone at Love Productions for making the show happen this year; and especially to the bakers who are, as ever, what makes the Bake Off cake rise.”