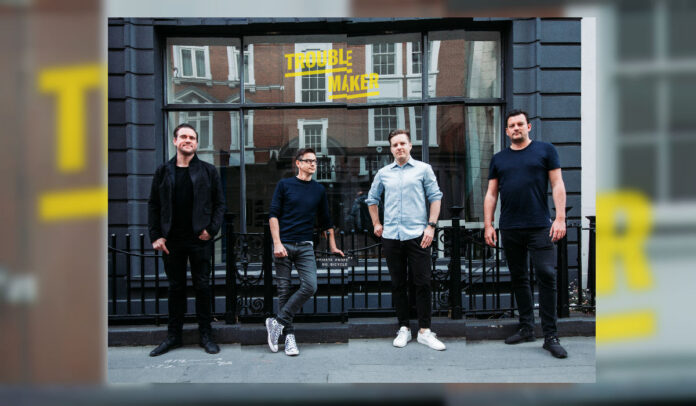 Trouble Maker, a new end-to-end content, media and distribution agency, has launched with a major client, Peroni Nastro Azzurro, on board.

It’s the first agency we know of to launch amid the global coronavirus pandemic and lockdown.

The four founders have worked with brands including Red Bull, McDonald’s, Mercedes-Benz and Absolut. They say they’ve created a pioneering new model that pushes campaigns to inspire change, do things first and make trouble.

Peroni Nastro Azzurro was won from incumbent Wunderman Thompson in a competitive pitch.

The agency has was appointed as global lead agency for Peroni; it will be responsible for campaign development across all channels, including digital and social.

“We were delighted to appoint Trouble Maker as our global creative agency and look forward to their expertise in making digital and social work at its hardest for our brand; through their creation of meaningful connections around the world”.

For every piece of output, Trouble Maker will bond industry leading creative with best-in-class performance; establishing a constant feedback loop with which to create, analyse and optimise.

Adam Clarkson, Founder & Chief Business Officer at Trouble Maker said: “We love the trade but not the tradition.

“Our business is predicated on the belief that creative and media should do more than simply work together in relay, they should influence each other and be ever-present equals in priority, from the first thought to the billionth view.”

Trouble Maker will be based at 75 Newman Street, London, and aims to partner brave challenger brands that want to mess with the status quo, as well as leading brands looking to maintain a competitive edge through innovation and pushing the boundaries.

The agency is actively seeking brilliant new Trouble Makers who believe that the industry isn’t keeping pace with consumers and want to cause a transformation in how the client-agency model works.

Jonathan Fraser, Founder & Chief Strategy Officer at Trouble Maker said: “At Trouble Maker, unorthodox is the name of the game, because we believe the traditional agency set-up has lost both pace and relevance.

“Our team is brimming with agility, ambition and understanding of the need for value.

“Trouble Maker’s core values are: do it first, inspire change and make trouble.”

Hankin (left, main photo) has been a marketing pioneer since 1999. He began by spearheading digital innovation across Sony Music, building the first-ever artist online communities; transforming how singles and albums were marketed; and establishing partnerships with leading digital retailers including Amazon and Apple.

He founded digital agency Holler, which was sold to Publicis in 2011; worked with Red Bull and Innocent Drinks; and launched Skins for Channel 4.

By taking a channel-agonistic approach that removes the disconnect between media, strategy and creative, he steered disruptive strategies for Champion’s 100 Year anniversary, LEGO’s Rebuild The World, Red Bull’s fashion label, AlphaTauri, and Selfridges.

He started at Holler and has worked at Sid Lee in North America and at Anomaly; where he introduced the agency to the Middle East.